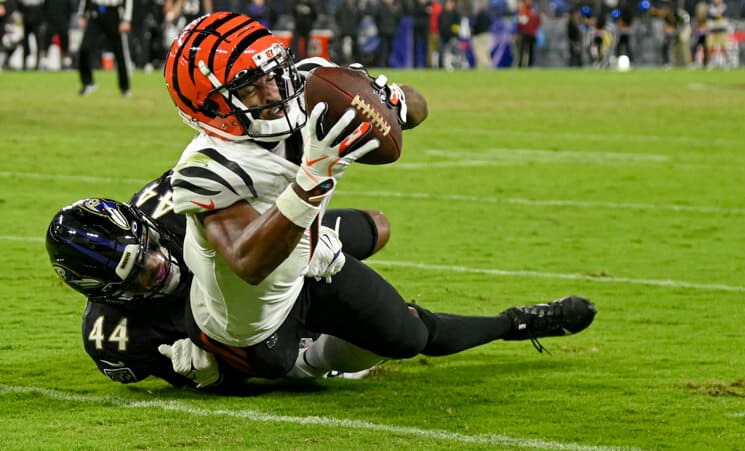 Having attended college together in the Mardi-hearty state of Louisiana, it’s fair to assume that Joe Burrow and Ja’Marr Chase know their way around a hangover. But until they lost a heartbreakingly close NFL championship game to the Rams in Los Angeles in February and started this season out with a pair of deflating losses to the Steelers and Cowboys, the Cincinnati Bengals duo had yet to feel the wrath of the so-called “Super Bowl hangover.”

Only eight teams in NFL history have returned to the Super Bowl the year after losing it. And of those eight, just three have avenged the prior season’s loss by hoisting the Lombardi Trophy. This helps explain why oddsmakers weren’t especially bullish on the Bengals’ title chances heading into this season, assigning them odds ranging from 20/1 to 22/1 — which precisely mirror their current odds at Bally Bet (20/1) and Betfred (22/1), respectively.

The Bengals have mostly looked like their old selves of late, winning four of five games and reviving one of the most dynamic passing attacks in the league. But on Thursday, Cincy gave word that Chase would miss four to six weeks with a hip injury. The news reduced the 4-3 Bengals from 3.5-point to 3-point favorites over the 2-5 Browns at both Bally Bet and Betfred for a Halloween night tilt in Cleveland.

Those two sportsbook operators are official sports betting partners of the intrastate NFL rivals and are expected to join many others launching in Ohio on Jan. 1 for the state’s first legalized betting.

Both books have Cincinnati at -175 on the moneyline, with BallyBet offering a slightly better (+155) price on Cleveland to win at home. Bally Bet had the over/under at 45.5 points as of Thursday evening, while Betfred set it at 45.

Opposite offenses in Ohio

After a stellar 2021-2022 season in which he ran for 1,205 yards and 13 touchdowns while averaging 4.1 yards per carry, Bengals tailback Joe Mixon has struggled to find daylight so far this year, running for 405 yards on just 3.3 yards per carry. But with 4/1 odds (Betfred) to lead the NFL in passing yardage, Burrow and his receiving corps have compensated nicely.

As they wait for Deshaun Watson’s suspension to end in a month, the Browns have had to hike the ball to backup quarterback Jacoby Brissett, who’s been average at best. Thankfully, Cleveland boasts one of the best running backs in the game in Nick Chubb, who’s notched 740 yards and eight touchdowns on the ground on nearly 6 yards per carry and is a 3/1 co-favorite (with Giants tailback Saquon Barkley) to lead the league in rushing at Betfred.

Of the Browns’ five losses, four have come by a field goal or less, which seems to indicate that a Hot Chubb Time Machine to a future where Watson’s back in action could put the Mistake by the M’Lake on relatively equal footing with its downstate enemy.