Bengals Not A Super Bowl Favorite Despite Stellar 2021

Cincinnati's offense should be among the best in the NFL, assuming Joe Burrow remains healthy 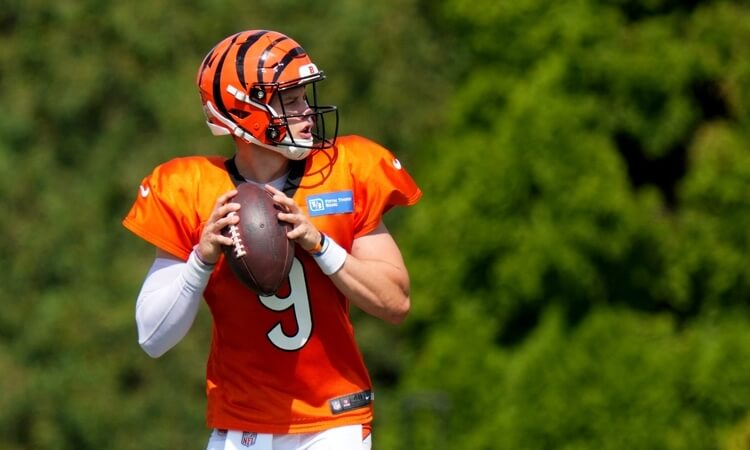 Final roster cuts are complete, giving Cincinnati Bengals fans a stronger understanding of what this year’s team will look like ahead of its Sept. 11 season opener against the Pittsburgh Steelers. The Bengals, fresh off a Super Bowl appearance, figure to be one of the numerous teams vying for the AFC title.

With Joe Burrow (+1100 to win the MVP at PointsBet) at quarterback and Ja’Marr Chase, Tee Higgins, and Tyler Boyd at wide receiver, it’s easy to like the potential of the team’s passing attack. Adding tight end O.J. Howard shouldn’t hurt either. Offensive line play was suspect at times last season, but the Bengals addressed the need over the offseason.

Defensively, the line should be tough with Trey Hendrickson leading the way. A strong defensive front is critical in today’s game, especially from a pass-rush perspective. The secondary looks talented on paper, and while Cincinnati’s defense might not be the NFL’s best, it’s a good unit.

The #Bengals secondary of:

Has to be the best secondary the team has had in a very long time.

Solid team, but competition is fierce

Despite a quality roster, the Bengals are +2200 to win the Super Bowl at DraftKings and FanDuel. PointsBet and WynnBET list Cincinnati at +2000 to hoist the Lombardi Trophy.

The Bengals have about the 10th-shortest odds to win the Super Bowl across most national mobile sportsbooks. Oddsmakers view Cincinnati as a contender, but certainly not a Super Bowl favorite.

With surgical accuracy and elite weapons, Joe Burrow is set to take a huge step in fantasy this season. pic.twitter.com/xEgjbq4WMn

The Buffalo Bills are the favorite at most sportsbooks, with their odds as low as +550 at DraftKings. The Tampa Bay Buccaneers, with legendary quarterback Tom Brady, are close behind the Bills with odds of +700 at DraftKings.

The Kansas City Chiefs, Los Angeles Rams, Green Bay Packers, Los Angeles Chargers, San Francisco 49ers, Baltimore Ravens, and Denver Broncos are other expected contenders. Winning the AFC will be a massive challenge for Cincinnati, with the Bills, Chiefs, Chargers, Ravens, and Broncos all expected to have a shot. BetMGM lists Cincinnati at +900 to win the AFC.

Baltimore is the betting favorite (+145 on WynnBET) to win the AFC North, with the Bengals close behind at most sportsbooks. The Browns and Steelers aren’t expected to be Super Bowl threats in 2022.

Whether a Super Bowl hangover for teams is real or not, history suggests it’s hard to lose the Super Bowl and make it back to the game the following season. Only eight teams in NFL history have accomplished the feat, with three of those eight winning the title. The Chiefs came close to returning to the Super Bowl a year ago, but Cincinnati rallied to beat them in the AFC Championship.

In 2020, the 49ers went 6-10 as injuries derailed their season. In 2019, the Rams went 9-7 and missed the postseason. (Clearly, the franchise has since rebounded well.) In 2018, the New England Patriots returned to the Super Bowl and defeated the Rams 13-3 in a defensive battle, quickly earning redemption.

Winning in the NFL isn’t easy, and it’s remarkably hard to make it back to the Super Bowl in consecutive seasons. The Bengals have their work cut out for them in 2022, but they also have a young franchise quarterback and quality pieces surrounding Burrow on each side of the football. It’s not an outlandish possibility — although betting odds suggest it isn’t the most likely scenario.