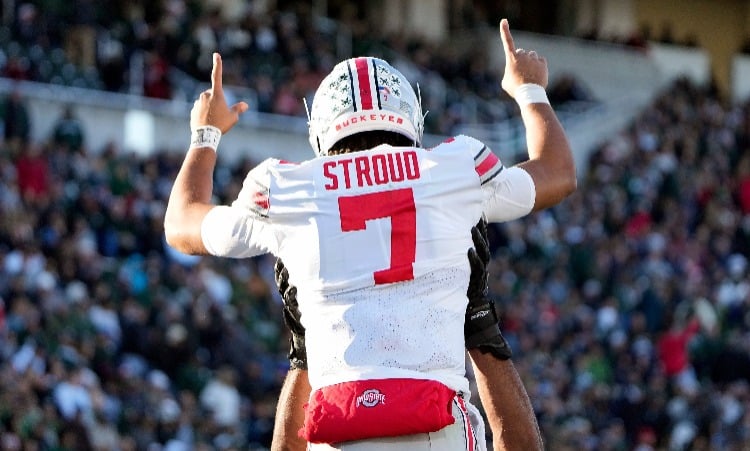 Halfway through the 2022 season, the junior is continuing on the same path as when he found himself at the end of the 2021 regular season sitting among the Heisman Trophy finalists at the award ceremony in New York City.

Through six games, Stroud is on pace to finish with numbers close to what he produced last year for the Buckeyes. He has passed for 1,737 yards while completing 113 of 160 passes, or 70%. He’s thrown 24 touchdowns while being picked off only three times. He’s accounting for 290 yards passing per game for the No. 2 ranked Buckeyes (6-0), who are averaging 543 total yards per game.

Stroud was the preseason favorite to win the Heisman Trophy presented to the outstanding player of the year. With six games remaining, the mobile sportsbooks like  Stroud’s chance to win the trophy even more than before the season began. FanDuel has odds of +100 on Stroud winning it, compared to +200 in the preseason. DraftKings has odds of +110 for Stroud to win after offering odds of +250 during the preseason.

BetMGM is offering the shortest odds on the Buckeyes QB winning the Heisman Trophy at -110.

The Buckeyes are coming off an 11-2 campaign last fall, which concluded with Stroud leading the way to a thrilling 48-45 victory over Utah in the Rose Bowl on New Year’s Day. Stroud delivered a record-setting performance, completing 37 of 46 pass attempts for 573 yards. A half dozen of his completions were good for touchdowns while only throwing one interception.

For the season, Stroud completed 317 of 441 passes for 4,435 yards, including 44 TDs and only six interceptions. He averaged 370 passing yards last season while completing 72% of his pass attempts

Ohio State head coach Ryan Day believes his starting quarterback is an improved player from last season when he delivered plenty of big-play moments in a double-digit win season.

“I think the first thing you notice is just his movement,” said Day, reports Bucknuts. “I think you could see that in the first couple games. His movement has been improved. Whether it’s been out of the pocket, doing some things that are designed or not designed, scrambling extending plays, like he had to do in the first game and a couple other games. I think that’s been good.

“His red zone play has been excellent. I think when he’s had to throw the ball away, he’s thrown the ball away, but he’s also made some really good throws down there, which has led to us being successful in the red zone. But overall, I just think it’s his leadership, his vision, his accuracy, all of the above.”

Right back in the Heisman Trophy race

Statistically, Stroud ranked among the nation’s best signal-callers last season, making him a finalist for the Heisman Trophy. Alabama QB Bryce Young won it, with Stroud placing fourth. Young would have a chance to become the second player after Ohio State running back Archie Griffin (1974-75) to win back-to-back Heisman awards, but his bid for a repeat suffered a significant setback after Alabama fell 52-49 to Tennessee Saturday.

Stroud and the Buckeyes are coming off a bye week and will resume action with a home game against Iowa (3-3) on Saturday afternoon.

Stroud and the Buckeyes offense have been on fire, particularly after their season-opening 21-10 victory over Notre Dame. Since then, Ohio State has scored no less than 45 points in a contest. Stroud has thrown for at least five touchdowns in three games this season, which is the most of any NCAA quarterback.

Stroud, along with a talented wide receiver group that features Emeka Egbuka (35 receptions/655 yards/6 TDs) and Marvin Harrison Jr. (31/536/9) and an improved defense will be key down the stretch for a Buckeyes team looking to win the Big Ten and vie for the national title.