Sophomore QB has plenty of help returning that could help him win college football's top award. 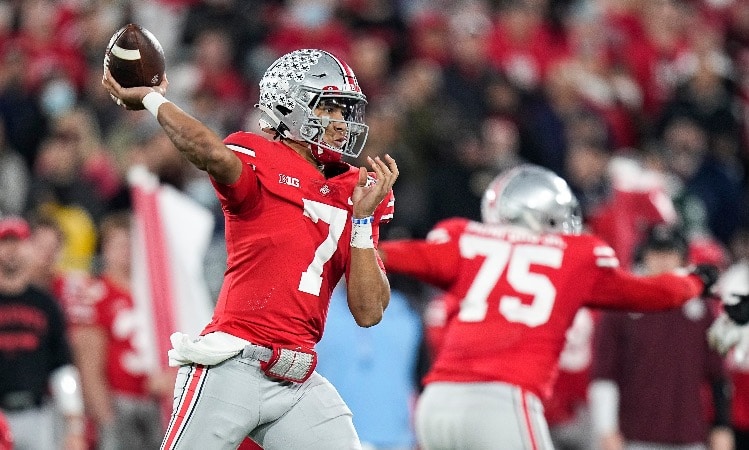 Spring football is in the books and Ohio State’s strong-armed quarterback C.J. Stroud is projected by OH mobile sportsbooks and others to do extremely well in leading the Buckeyes offense in the fall.

The 6-foot-3, 218-pounder is FanDuel’s and DraftKings’ preseason favorite to claim the 2022 Heisman Trophy award coming off a year in which he was named the Big Ten Quarterback of the Year, Big Ten Offensive Player of the Year, and Big Ten Freshman of the Year.

FanDuel has odds of +200 on Stroud winning the award presented annually to college football’s outstanding player, while DraftKings has odds of +250. FanDuel and DraftKings have odds of +400 and +350, respectively, on the reigning Heisman Trophy recipient — Alabama quarterback Bryce Young — to win the award again.

FanDuel rounds out its Top 5 in Heisman odds with +1200 on Caleb Williams, who transferred to USC from Oklahoma, and +3000 on both Miami’s Tyler Van Dyke and Clemson’s D.J. Uiagalelei. DraftKings has odds of +750 on Williams and +2500 each on Uiagalelei and Texas’ Bijan Robinson.

Stroud and the Buckeyes begin the season on Sept. 3 hosting Notre Dame, which will be the first of five straight home games at Ohio Stadium.

Stroud striding to be considered the best

Stroud, who finished fourth in last year’s Heisman Trophy race, is coming off a stellar season in which he completed 317 of 441 passes for 4,435 yards, including 44 touchdown completions while tossing only six interceptions.

His pocket skills were most recently on display during the Buckeyes’ spring game. He connected on 14 of 22 passes, including a 29-yard touchdown completion to standout wide receiver Jaxon Smith-Njigba, who has odds of +6000 to win the Heisman Trophy and is the second-highest ranked non-quarterback on the list behind Texas running back Robinson. The tandem of Stroud and Smith-Njigba are also teaming up with Express clothing on an NIL deal.

Stroud led Ohio State to an 11-2 overall record, which included regular-season losses to Oregon, 35-28, and rival Michigan, 42-27. The loss to the Wolverines cost the Buckeyes the opportunity to play in the Big Ten championship game and a chance to possibly compete for the national championship.

Nonetheless, the Buckeyes did close out the year on a high note with a a dramatic 48-45 victory over Utah at the Rose Bowl. Stroud delivered a Rose Bowl record-setting performance, completing 37 of 46 passes for 572 passing yards and six TDs.

Stroud is surrounded with high-level talent that has the Buckeyes topping Caesars Sportsbook in its futures bets of at least $1,000 to win the 2022-23 national championship. Stroud no longer has NFL Draft prospects Garrett Wilson and Chris Olave as primary targets, but he still has plenty to work with in Ohio State’s passing game.