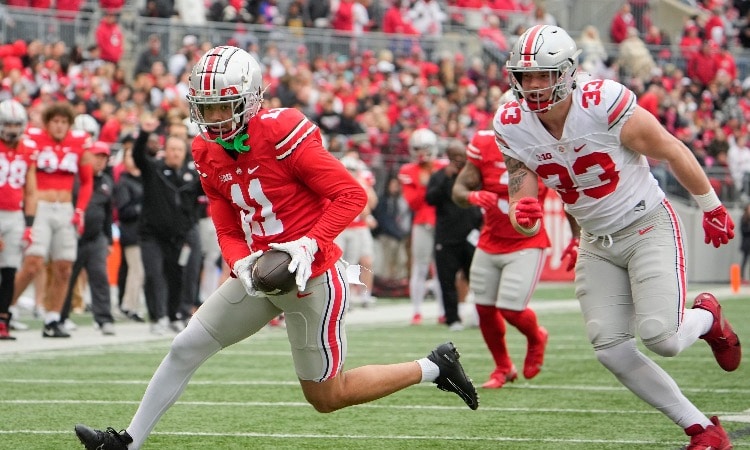 The Ohio State football team is clearly on the minds of some college football fans this spring, including sports bettors.

Ohio State opens the 2022 campaign with five straight home games, including a season opener against Notre Dame on Sept. 3. It is possible that newly legalized sports betting will launch in Ohio at some point during the Buckeyes’ season, though probably not till near the end.

Besides having a favorable schedule that includes eight home games, Ohio State has sophomore quarterback C.J. Stroud to spark enthusiasm for its chances to win the national championship. Stroud figures as a preseason Heisman Trophy candidate after completing 317 of 441 passes for 4,435 yards and 44 TDs while throwing only six interceptions last season.

He leads a talented offense and performed solidly during the Buckeyes’ Spring Game held Saturday before a crowd of 60,007 at Ohio Stadium. He completed 14 of 22 passes for 120 yards, including a 29-yard touchdown completion to wideout Jaxon Smith Njigba for the first score of the game. He completed passes to eight different receivers during five series against the Buckeyes’ defensive unit.

Njigba, a junior, is the top returning receiver after catching a team-leading 95 passes for 1,606 yards, including nine TDs. Marvin Harrison Jr., Emeka Egbuka, and Julian Fleming have shown plenty of promise while serving as wide receiver backups on a roster that included the departed Garrett Wilson and Chris Olave, who are projected to be among the top receivers chosen in the upcoming NFL Draft.

Sophomore running back TreVeyon Henderson returns after rushing last season for a team-leading 1,248 yards on 183 carries, including 15 rushing TDs. Miyan Williams ranked second on the team in rushing last season, gaining 508 yards on 71 carries, including three scores. Evan Pryor ranked fourth on the team in rushing with 98 yards on 21 carries, but figures to see more action in the backfield in the fall.

Williams had 101 rushing yards on 15 carries in the Spring Game while Pryor finished with 62 yards on nine carries, including a 22-yard TD run that helped the offense defeat the defense, 34-26.

Given OSU’s expected prowess, the number of futures bets on it to win the national title might make sense, while those on other schools seem more surprising, such as Utah State at +1000 odds. After playing host to Connecticut for their season opener on Aug. 27, the Aggies (AP No.  24 in final rankings with an 11-3 record last season) will play at Alabama on Sept. 3. The three bets placed on it for $1,000 potentially could cash for $1 million each at season’s end.

“We’ve seen some big liabilities, but I can’t remember one being that much on college football futures this early on,” said Adam Pullen, Caesars Sportsbook’s assistant director of trading. “It’s an anomaly that this big of a longshot in college football attracted three $1,000 bets. I definitely respect the gumption of the bettors for putting that much on Utah State. It’s going to take a lot for them to even get playoff consideration. They’ll have to go undefeated.”