Justin Leonard recently turned 50 and is in the Champions Tour field playing in the Bridgestone Senior Players Championship. 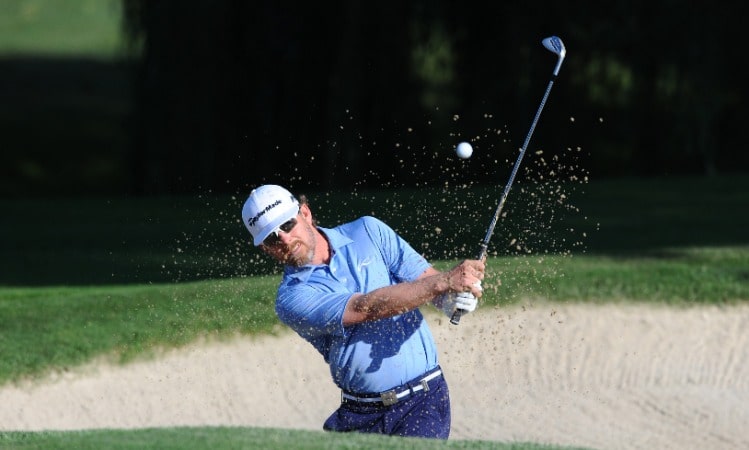 Among the 60 seniors scheduled to tee off is Justin Leonard, who turned 50 last month. The 1997 Open Championship winner is making his debut on the Champions Tour. Despite a dozen PGA Tour wins, Leonard’s first time out on the Champions Tour hasn’t made him a favorite among online sportsbooks to claim victory over older peers.

FanDuel has odds of +7500 on Leonard winning the Bridgestone Senior Players Championship while DraftKings and Caesars have slightly worse odds of +8000 on Leonard topping the field. If he succeeds, he would become only the second player (after Retief Goosen in 2019) to win the Bridgestone Senior Players Championship as a first-time participant in a Champions Tour event.

FanDuel, DraftKings, and Caesars sportsbooks have odds of +500 on both Steve Stricker and Steven Alker to win the Bridgestone Senior Players Championship. Caesars and DraftKings have odds of +1000 on Miguel Angel Jimenez winning, with FanDuel offering +1100.

Legal wagering on the Champions Tour can only take place outside of Ohio since the state’s sports betting platform is still in development by the Ohio Casino Control Commission, to be readied for universal launch on Jan. 1.

Stricker is the defending champion, having won by six shots in 2021. The winner will take home $450,000 from a prize pool totaling $3 million.

The FOX-backed USFL capped its first season on Sunday night with the Birmingham Stallions defeating the Philadelphia Stars 33-30 at Tom Benson Hall of Fame Stadium in Canton.

FanDuel and DraftKings had Birmingham as a 4.5-point favorite to defeat Philadelphia for the championship.

The league, which played its entire regular-season schedule in Birmingham, held the two weekends of postseason play in Canton, on the field next to the Pro Football Hall of Fame. The championship game attracted the most-watched and most-streamed USFL matchup since the opening week of the season. FOX viewership peaked at 1.8 million viewers from 10:30-10:45 ET.

🏈 Sunday’s @USFL Championship between the @USFLStallions and @USFLStars peaked at more than 1.8 million viewers on FOX – the most-watched and most-streamed USFL contest since Week 1.

The league, which consisted of eight teams, clearly wanted to make its presence felt on Twitter following the Stallions’ victory.

Thank you for an incredible season, USFL fans ❤️

We'll see you next year for SEASON 2 🔥🙌 pic.twitter.com/NeZSXIyDWA

Cleveland’s All-Star guard Darius Garland didn’t hesitate recently to sign a five-year, $193 million rookie contract extension that could be worth as much as $231 million, pending being voted onto one of the three All-NBA teams next season.

Earning All-NBA status would certainly occur if the crafty point guard were to be named the NBA 2022-23 regular season MVP. FanDuel has long odds of +13000 on Garland winning the MVP award while Caesars has even longer odds of +25000. No Cav has won the award since LeBron James won it two years in a row (2009-2010).

Garland averaged 21.7 points and 8.6 assists last season, which was his third year in the league since being selected with the fifth overall pick in the 2019 NBA Draft.

Darius Garland will be an MVP one day

Congratulations to Gary's own Darius Garland who agreed on a five-year, $193M maximum designated rookie contract extension with Cleveland that could be worth as much as $231M
🔥🔥🔥
It is the largest deal in Cleveland Cavaliers franchise history. pic.twitter.com/Th5tICcPMv