NBA game viewed as local windfall now, as with sports betting in the future. 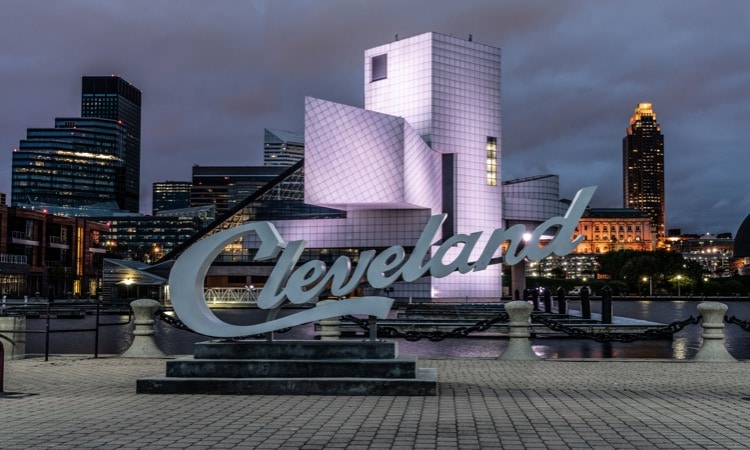 Signage promoting the NBA’s midseason classic is plastered on the side of buildings all across downtown Cleveland.

Yet, those visiting Cleveland for the All-Star festivities will not have the opportunity to place any legal wagers on the game. Sports betting was legalized in Ohio on Dec. 22, but it’s not yet operating. The law details that legal sports betting must start by Jan. 1, 2023.

This is the third time Cleveland has hosted the NBA All-Star Game, which many consider the best All-Star event among America’s professional sports leagues. Cleveland was previously host in 1981 (Richfield Coliseum) and 1997 (also Rocket Mortgage FieldHouse, but then called Gund Arena).

Individuals around Rocket Mortgage FieldHouse and JACK Cleveland Casino seem quite welcoming to Cleveland hosting the 71st NBA All-Star Game and its complementary events (Skills Challenge, Slam Dunk, etc.), as well as Ohio eventually becoming a state where you can place a sports bet.

Sitting with a handful of poker chips in front of him at a bar on the second floor of JACK Cleveland Casino, Tom Lancianese, of Akron, said he’s excited about Cleveland hosting the NBA All-Star Game and Ohio eventually becoming a state where you can place a sports bet.

“I think it’s awesome,” Lancianese said of the game, though he won’t be attending. “I think it’s good for Cleveland.”

He said he’s not one to bet on sports, but hasn’t ruled out making any bets whenever sports betting is up and running in Ohio.

Retired television studio engineer Rich Shenker moved to Cleveland from the Bay area seven years ago to be near family. His gambling game of choice is poker, which he plays regularly at JACK Cleveland Casino.

Shenker — eating a meal at a Wahlburgers restaurant before going to play poker across the street — said he will pass on playing poker later in the week when larger crowds are expected to overtake the area, due in part to All-Star Game activities.

“I will not be coming downtown,” Shenker said. “I’m assuming at the end of the week it’s going to be messy, but I think it’s cool that it’s in Cleveland. I’ll watch it [on TV].”

As for living in a state where sports betting will eventually become a reality, Shenker approves, even if he doesn’t plan on betting much himself.

“I’m not a big sports bettor, but I’m not saying that I wouldn’t ever make a bet,” he said. “But I think it’s cool. Guys at the poker tables talk about sports betting, but I kind of ignore it.”

“Indiana has it, so Ohio might as well, too,” said Huffman, who was spending time in Cleveland this week for work. “Indiana has been getting all the [sports betting] money and people are going to gamble on just about anything.”

Retiree Bob Flemming, who spent time Monday afternoon with his wife at JACK Cleveland Casino, thinks legalizing sports betting is a positive for the state even if he doesn’t follow sports other than the PGA.

All good for local business

NBA All-Star weekend is welcomed by host cities, in part, because it’s assumed to be an economic boon to the local economy.

Meih Stevenson, who just opened a women’s clothing boutique in Tower City only a month ago, is hopeful of the event’s positive impact. Tower City, an indoor shopping center in downtown Cleveland, is the site for the NBA’s Ice Buckets pop-up buzzer beater event.

Hasan Caliph, who manages a shoe cleaning business with family members inside Tower City, also believes having the NBA All-Star Game in Cleveland is good for business.

As for sports betting in Ohio, Caliph didn’t have much to say about that topic.

“I’m not really familiar with that,” he said. “If it’s going to bring revenue to the state, then that’s good. Hopefully, no one ends up having a gambling problem because of it.

“I don’t gamble myself.”