Oddsmakers Like Buckeyes, Who Hope To Display Improved Defense At Spring Game

Oddsmakers have OSU again among favorites for national title, with Stroud's return after fabulous freshman season. 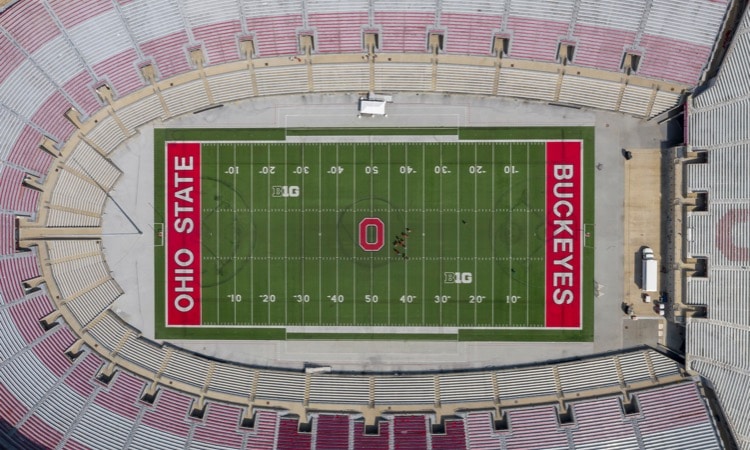 Most Division I college football programs would appreciate having the kind of season Ohio State experienced last fall.

The Buckeye capped the season ranked in the Top 10 after a thrilling comeback win over Utah in the Rose Bowl. They finished the year 11-2 overall. Yet, the 2021-22 campaign didn’t quite cut it.

Failing to defeat rival Michigan and not even reaching the Big Ten championship game turned out to be glaring setbacks for a team that figured to be among the four teams to play in the College Football Playoffs. As a result, Ohio State head coach Ryan Day determined that it was time to tweak his coaching staff.

In spite of outscoring their opponents an average of 45.7-22.8 per contest, Day wasn’t satisfied with what took place on the defensive side of the football for the Buckeyes.

Knowles welcomes the opportunity to try and put together a championship-caliber defense at his latest stop.

The Buckeyes are practicing three times a week leading up to the annual Spring Game set for April 16 at Ohio Stadium.

Defensively, Knowles came in emphasizing tackling technique, particularly since the Buckeyes struggled to bring ball carriers down in some games. He believes those issues can be corrected with work on “rugby style” tackling technique. So far, Day likes what he’s seen from the defensive scheme Knowles is putting in place.

“You can tell it’s very well-organized and it’s very well-thought out and there’s a reason for everything,” Day said of the Buckeyes defense. “I just like how everything is systematic about how they teach. You can give different looks for the quarterbacks. … You can see where if you’re not prepared for it, it can really give you some strange looks.”

The Buckeyes lost some key players on offense, notably wide receivers Chris Olave and Garrett Wilson, both projected as first round selections in the NFL draft. Yet, the cupboard is far from empty.

Highly skilled quarterback C.J. Stroud returns behind center after a freshman year in which he was named the Big Ten offensive player of the year, quarterback of the year, and freshman of the year. Stroud passed for 3,862 passing yards and 38 touchdowns during the regular season while leading the Buckeyes offense to a nation-leading 551.4 total yards per game.

Hard not to think Stroud will continue right where he left off from the Rose Bowl.

“At this point last year he hadn’t thrown a college pass, so now he has a whole year under his belt,” Day said. “You’re kind of learning what to do, now you’re kind of learning why you do it. There’s a little bit more deeper understanding of things.  There’s a Rolodex of plays under his belt. We’re going to look at some new concepts, too — some things that he can handle and maybe put a little more on his plate on the line of scrimmage.”

Jaxson Smith-Njigba is back for his junior season after catching a team-best 95 passes for 1,606 yards, including nine touchdowns. Marvin Harrison Jr. showed flashes during his sophomore season of becoming another serious pass-catching threat, recording 11 catches for 139 yards, including three touchdowns.

TreVeyon Henderson is the top returning ball carrier after a freshman season in which he rushed for 1,272 yards on 183 attempts, including 15 TDs.

Tickets went on sale for the Spring Game on Feb. 11. General admission tickets are $7. A limited number of reserved club seats are available at $30.