Heisman Trophy candidate C.J. Stroud is expected to lead Ohio State to a decisive win over the Irish to kick off the season on Sept. 3. 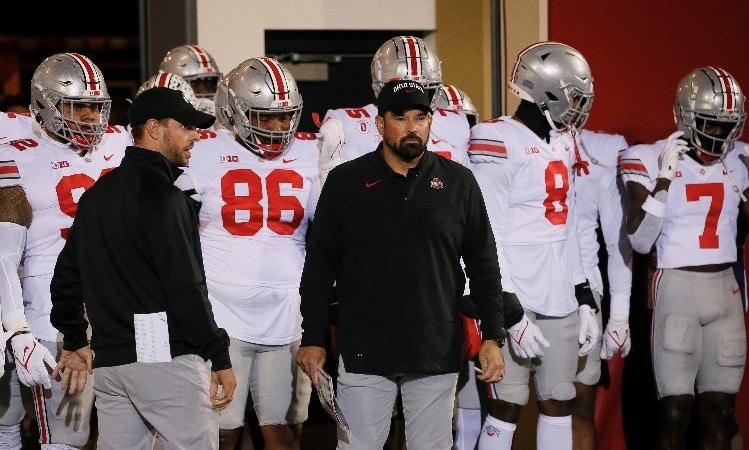 Whether the 2022-23 college football campaign closes with Ohio State playing for a national championship, the Buckeyes’ season will kick off in a major way when they play host to Notre Dame in a nationally televised (ABC) matchup under the lights at Ohio Stadium on Sept. 3.

DraftKings and Caesars Sportsbook have the Buckeyes as 14.5-point favorites, while FanDuel has Ohio State as a 14-point favorite to deliver the Fighting Irish a season-opening defeat.

Considering the history between the two historic college football programs, it’s not that surprising to see sportsbooks favoring the Buckeyes. Ohio State has prevailed over Notre Dame in the last four meetings and owns a 4-2 all-time record against the Irish. Notre Dame’s brief success against Ohio State dates back to the Depression Era, claiming victories in 1935 and 1936. The last time the two teams met was in the 2016 Fiesta Bowl, in which the Buckeyes prevailed 44-28.

The Buckeyes, under head coach Ryan Day, are coming off a 2021 campaign that resulted in an 11-2 record. That included a 35-28 Week 2 loss to Oregon in Columbus and a 42-27 regular-season ending defeat on the road against Big Ten nemesis Michigan. The Buckeyes did earn a trip to the Rose Bowl, where they posted a 48-45 victory over Utah.

The Ohio State Buckeyes will kick off their 2022 football season under the lights at the Horseshoe when they host Notre Dame. Details here: https://t.co/6ZnzO1g235

Ohio State, which will be hosting ESPN’s College GameDay on Sept. 3 for a record 21st time, will be led by Heisman Trophy candidate quarterback C.J. Stroud, who finished fourth in last year’s Heisman Trophy race when he passed for 4,435 yards, including 44 touchdown passes. Perhaps his finest performance took place in the Rose Bowl, when he passed for a school-record 573 yards, including six touchdowns. With eventual NFL Draft first-round selections Garrett Wilson and Chris Olave opting out of the bowl game, Stroud looked to Jaxon Smith-Njigba, who pulled in 15 catches for a school-record 347 receiving yards (including three TDs) in the shootout with Utah.

Building blocks in place for Buckeyes

Smith-Njigba, who led the Buckeyes in receptions (95) and receiving yards (1,606) last season, is among the top returning receivers in college football. Defensively, linebacker Tommy Eichenberg, who was in on 10 tackles during Ohio State’s Spring Game, will be among the leaders for a revamped Buckeyes team that oddsmakers expect to avenge last season’s loss to the Wolverines.

Notre Dame’s first-year head coach, Marcus Freeman, couldn’t have asked for a tougher situation to start his tenure. Not only will the former Ohio State linebacker be facing his alma mater, but Notre Dame is playing on the road in a nationally televised game against a Buckeyes team that enters the season with high expectations.

Irish quarterback Tyler Buchner is expected to lead the way for an offense that lacks experience among the skill positions. Highly touted tight end Michael Mayer, who recorded a team-best 71 catches for 840 yards last fall, leads the group of pass catchers.

The Irish defense will be led by a potential future first-rounder in defensive end Isaiah Foskey. Incidentally, it’s also the first year for defensive coordinator Al Golden, a former head coach at the University of Miami.

The Buckeyes-Irish matchup is the first meeting of a home-and-home series, so at least the loser will have a chance for redemption next year. The Irish have not faced a ranked opponent to start the season since 2018, when they beat Michigan by a score of 24-17.