No. 2 Ohio State A Decisive Favorite Against 13th-Ranked Penn State

Defensive coordinator Knowles has Buckeyes winning with playmaking at forefront 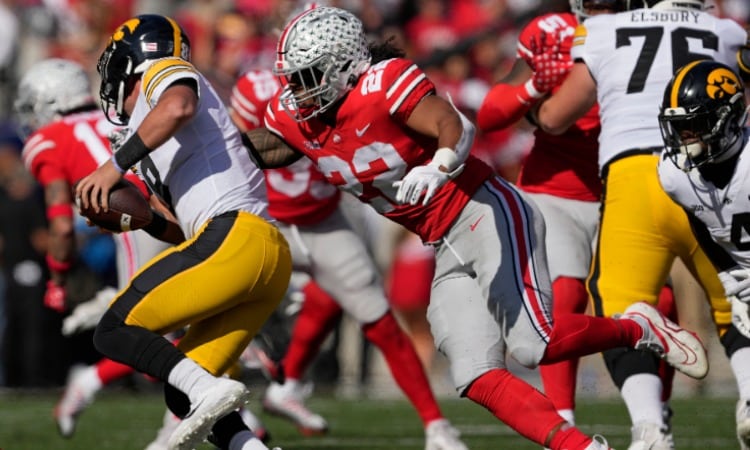 Second-ranked Ohio State played possibly its worst offensive game of the season Saturday against Iowa before a huge crowd of more than 100,000 at Ohio Stadium.

The Buckeyes offense struggled at times against a swarming, top 10 Hawkeyes defense. Heisman Trophy frontrunner C.J. Stroud was held to less than 300 passing yards, while TreVeyon Henderson didn’t provide much of a ground attack, leading all Buckeye ballcarriers with 38 rushing yards. The Ohio State fan base experienced more moments of uneasiness than probably for any other home game this season since the season opener against Notre Dame, which Ohio State won 21-10.

Despite not being on its “A” game, Ohio State marched right past Iowa in a 54-10 blowout that raises its record to 7-0.

“I think the story is about the defense and how well they played,” said Ohio State coach Ryan Day, according to reports.

The Buckeyes, who have held four opponents to 12 points or less and haven’t allowed any team to score more than 21 points all season, expect to face one of their toughest challenges Saturday when they hit the road for only the second time this season to face 13th-ranked Penn State (6-1).

The mobile sportsbooks, which have routinely liked the Buckeyes all season, are leaning strongly in Ohio State’s favor.

FanDuel, BetRivers, WynnBET, and Caesars Sportsbook have Ohio State as a 15.5-point favorite, despite Penn State coming off an impressive 45-17 shellacking of Minnesota. FanDuel and BetRivers have the over/under at 60.5 points, while WynnBET and Caesars list the total slightly higher at 61 points. Caesars has the moneyline set at -700 for Ohio State and +500 for Penn State, while FanDuel has the moneyline set at -650 for the Buckeyes and +460 for the Nittany Lions.

Until now, the Buckeyes have spent much of the 2022 season playing in the friendly confines of Ohio Stadium. Their only road test came in Week 6, when they traveled to East Lansing and had little trouble scoring a 49-20 victory over Michigan State. The Nittany Lions figure to provide a much more difficult road test at Beaver Stadium before an enthusiastic fan base.

Penn State’s only blemish this season was a 41-17 defeat at fourth-ranked Michigan. The Nittany Lions rebounded nicely from the setback by taking care of Minnesota. Led by veteran quarterback Sean Clifford, who has thrown for more than 1,400 passing yards and 13 touchdowns, Penn State offers the kind of road test that could make for a long afternoon for a team not prepared to play four quarters. The Nittany Lions are outscoring opponents by an average of 33.4 to 18.9.

The Buckeyes’ trip to Happy Valley is the first of three road games in the next four weeks. To this end, Day understands the significance of showing up and being ready to play well on the road, beginning at Penn State.

“It’s very important; the challenges are going to get bigger and bigger,” Day said. “We need to be balanced across the board, we need complementary football, we need special teams — you know, we need everything.”

Besides Stroud and the rest of the Buckeyes offense being ready to take on Penn State, the Buckeyes defense must be ready to go. That really hasn’t been an issue through the first seven games. In his first season at Ohio State, defensive coordinator Jim Knowles appears to have come right in and made the kind of difference that Day was hoping for when he brought him over from Oklahoma State.

Ohio State safety Lathan Ransom has been named one of 12 semifinalists for the Thorpe Award, which is presented to college football's best defensive back: https://t.co/3dDHqPknq8

The Buckeyes defense is holding opponents to 14.9 points per game. They haven’t registered any shutouts, but they’ve basically kept offenses in check.

Linebacker Tommy Eichenberg has been a centerpiece in Knowles’ revamped defense, recording a team-leading 57 tackles, 33 of them unassisted. His effort against Iowa resulted in seven tackles and an interception that he returned for a touchdown.

Eichenberg has had plenty of help, especially in the secondary. Tanner McCalister, who followed Knowles from Oklahoma State to Ohio State, came through with a pair of interceptions against Iowa, including one that he returned for a TD. Safety Lathan Ransom has been a leading force recently named a semifinalist for the Jim Thorpe Award, which is presented to the best defensive back in college football. He ranks third on the team in tackles (29), while also accounting for an interception, a forced fumble, and a fumble recovery.

With their efforts, the Buckeyes rank in the top five in the nation in total defense (239.9 yards allowed per game, 2nd), scoring defense (14.9 points per game, 5th), and passing defense (149 yards passing per game, 3rd).

On Saturday, the Buckeyes’ newly constructed defense will be put to the test — again.