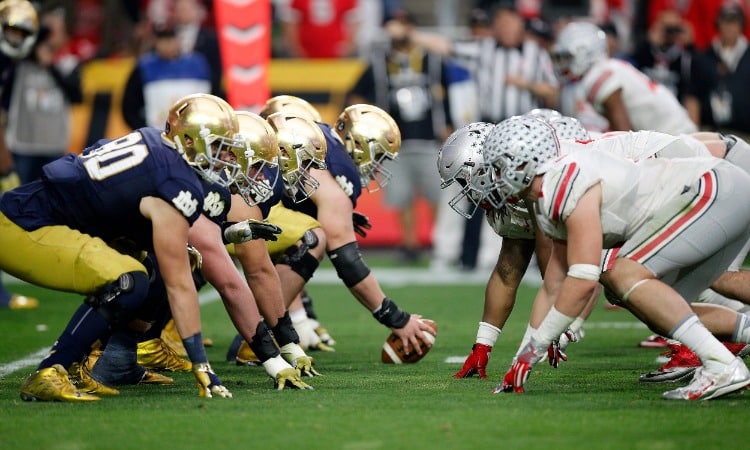 Preseason rankings make No. 5 Notre Dame playing at No. 2 Ohio State in a prime-time matchup on Saturday night easily the most compelling contest in Week 1 of the college football season.

Whether it lives up to the early season hype and national billing remains to be seen. One thing is certain: The sportsbooks like the Buckeyes as runaway favorites against the Fighting Irish.

FanDuel has Ohio State as a 17.5-point favorite while offering the over/under at 58.5 points.

Placing a legal wager on sports in Ohio will not be available, however, until the universal launch date for sports betting arrives Jan. 1, 2023. Until then, Ohio residents can travel to neighboring states that offer sports betting to place a sports bet.

Matchup made for TV

The meeting of Midwest powerhouses is drawing plenty of attention from bettors.

“We opened up this line in May with Ohio State as a 10.5-point favorite,” said Joey Feazel, Caesars Sportsbook lead college football trader, in a press release. “We were expecting a smaller skill gap between two Top-5 teams, but it appears in bettors’ minds that Ohio State is far better than Notre Dame. This line has now settled in at -17 and it appears to be holding ground at that number.

“One thing is for sure, Notre Dame certainly does not want to get into a shootout against the immensely talented Ohio State offense. I expect Notre Dame to try to keep the ball out of [Ohio State quarterback] C.J. Stroud’s hands and control the tempo of the game. But if Ohio State’s offense is as explosive as it looks on paper, this game could get out of hand quickly.”

The storylines are plentiful, beginning with the fact that these are two of college football’s most storied programs.

The last meeting between the two teams came in the 2016 Fiesta Bowl, in which the Buckeyes prevailed 44-28. The series history totals six meetings, with Ohio State winning the last four encounters to own a 4-2 series lead. The Irish last defeated the Buckeyes in 1936.

The game also represents the regular-season debut for Marcus Freeman as Notre Dame’s head coach. Interesting enough, Freeman grew up in Ohio and played linebacker at Ohio State, so he’s familiar with what it’s like to play before a sellout crowd in Columbus.

The Buckeyes, who finished 11-2 last year, are led by three of the best offensive players in the country, including Stroud, a Heisman Trophy candidate again, who passed for 4,435 yards and 44 touchdowns last season. His top target, wide receiver Jaxon Smith-Njigba, recorded 95 receptions for 1,006 yards last season, including nine touchdown catches. Sophomore running back TreVeyon Henderson, who rushed for more than 1,200 yards and 15 TDs, also returns.

The game also will include two brothers standing on opposite sidelines. Notre Dame sophomore Lorenzo Styles is one of his team’s top wideouts while his younger brother, Sonny Styles, is a freshman defensive back for the Buckeyes. As a freshman, Lorenzo Styles caught 24 passes for 344 yards, including a TD.

Tyler Buchner is Notre Dame’s most experienced signal-caller back from last season’s team that finished with an 11-2 record. In limited action, he had 298 passing yards after completing 21 of 35 pass attempts, including three touchdown passes and three interceptions. Running back Logan Diggs rushed for 230 yards on 52 carries, including three TDs.

The outcome of this one will certainly provide plenty of post-game conversation about both teams, no matter who comes out victorious.