Xavier An Underdog Against Texas A&M In NIT Championship Game

Musketeers hoping to create memorable ending to a challenging season by defeating the Aggies in the NIT Championship. 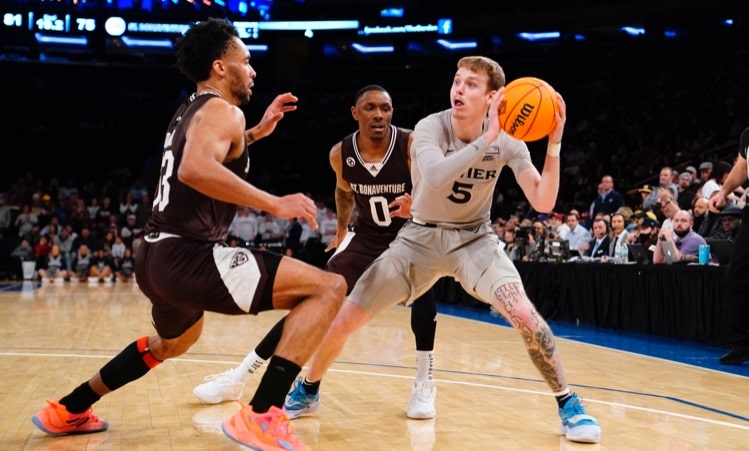 Coach Jonas Hayes has the Xavier University men’s basketball team in position to close out a tumultuous season on an unexpected high note, as the Musketeers are set to face Texas A&M in the NIT title game on Thursday night at Madison Square Garden.

Xavier (22-13) knocked off St. Bonaventure, 84-77, in one NIT semifinal on Tuesday, while Texas A&M (27-12) routed Washington State, 72-56, in the other. FanDuel, Draft Kings, and BetMGM have the Musketeers as 4.5-point underdogs, while BetRivers has them as 4-point underdogs.

The Musketeers’ surprising march to the NIT title game has taken place at a time when the team is in flux. The university decided to part ways with head coach Travis Steele (70-50)  prior to Xavier’s game against Florida in the second round of the NIT. Hayes, who was on Steele’s staff, was given the interim head coach tag and was asked to lead the Musketeers against the Gators.

In the meantime, Xavier announced it was bringing back former head coach Sean Miller, who previously was in charge of the Xavier program from 2004 to 2009. His return comes after he was fired by Arizona in 2021. Arizona’s program had been dealing with ongoing NCAA issues dating back to 2017, when the Wildcats were implicated in a federal investigation into corruption in college basketball.

On a championship run

Nevertheless, the Musketeers have won three straight contests during Hayes’ brief tenure. They’ve played arguably their best basketball of the season during this stretch, defeating Florida, 72-56, and Vanderbilt, 75-73, before taking care of business against the Bonnies.

It was roughly three weeks ago when Xavier suffered a disappointing 89-82 overtime loss to Butler in a Big East Tournament contest at MSG. That defeat likely had plenty to do with the Musketeers not receiving an at-large NCAA Tournament bid. But with Hayes in charge, the Musketeers find themselves back in New York with an opportunity to come away with a different tournament title.

I remember not too long ago. Xavier nation was in a civil war. Disagreements about the coach. About the players.
And now here we are. One game away from a NATIONAL invitational tournament championship.
Proud of this team and the run they’ve made. #HangABanner

“It has been a wide range of emotions, from sadness, to anxiety, to a little happiness for myself being put in a position like this,” Hayes said during a press conference following the win over the Bonnies. “Meeting adversity head-on the way our guys have done, that is what Xavier basketball is. I’m not surprised by the heart, the mettle, the desire, the commitment, the conviction that’s in our locker room, because we see that every day.”

Adam Kunkel, Jack Nunge, and Zach Freemantle each scored 18 points against St. Bonaventure to lead the Musketeers. Colby Jones, who finished with 16 points, said Xavier has become a more unified team during this late-season win streak.

“It goes back to what coach Hayes tells us before the game, ‘Play hard, play smart, and play together,’” Jones said. “I feel like we’re all playing for one another. Those tough times throughout the season have prepared us for this moment. I feel like we’ve executed really well.”