TBT Features A Who’s Who Of Has-Beens, And An Exploitable Betting Quirk 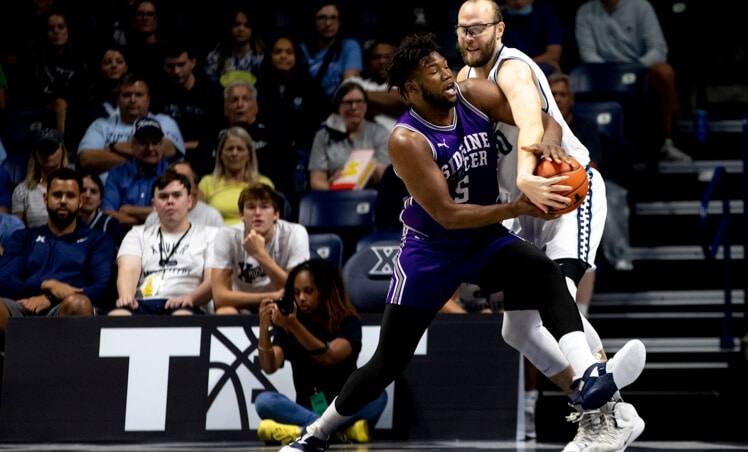 They are all former NBA players who are competing — or have already competed — in this year’s edition of The Basketball Tournament (TBT), a 64-team, March Madness-style competition with a winner-take-all prize of $1 million.

Some squads, such as the Floyd Mayweather Jr.-backed Money Team, are comprised of a who’s who of has-beens. (The Money Team, or TMT for short, counts Fredette, Booker, Evans, and Creek among its key contributors.) Other entrants are veritable college alumni all-star teams, like quarterfinalists Blue Collar U. (Buffalo) and the Aftershocks (Wichita State — get it?).

No, not that Elam

Mention the phrase “Elam Ending” to well-rounded sports fans of a certain age, and they’d be liable to assume it’s named after former Denver Broncos kicker Jason Elam, who, in the course of his sterling 15-year NFL career, became well-acquainted with crushing opponents’ souls with lengthy boots that soared through the uprights as twin zeroes appeared on the game clock. But in reality, the Elam Ending is named for its inventor, Ball State University professor Nick Elam.

Just what is the Elam Ending? Well, rather than a basketball game ending after time has expired (provided it’s not a tie), a set amount of points is added to the leading team’s score in the fourth quarter to determine the point total that must be reached before a winner is declared. In TBT, eight points are tacked on at the end. So, for example, when The Money Team led Men of Mackey (a squad comprised of Purdue alums) 83-70 in the fourth quarter in Dayton on Tuesday, the first team to 91 — TMT, ultimately — won.

TBT, which has been around since 2014, was the Elam Ending’s first adopter, and the gimmick has proven so popular that the NBA integrated the wrinkle into its All-Star Game in 2020, playing three full quarters and then adding 24 points (in honor of the late Kobe Bryant’s jersey number) to the leader’s point total to determine what the winner’s final score will be.

As a result, the NBA’s mid-winter showcase has gone from a Sunday siesta featuring hungover all-stars throwing reckless lobs and playing matador defense to a semi-compelling duel featuring at least a quarter’s worth of tenacious D, crisp passing, and clutch shooting faintly reminiscent of a playoff game.

Not by accident, TBT is programmed for a summertime blues spot in the sporting calendar that makes it an attractive option for sports bettors who’ve grown tired of wagering on baseball. The tournament also features a somewhat disjointed game schedule that creates windows for potential wagering exploitation.

Heading into Tuesday night’s action, six of the eight quarterfinal spots were already spoken for, with the Gutter Cats advancing out of the Omaha Regional a full week earlier on July 19 and three other teams punching their tickets by July 21. But the last two quarterfinalists — both of whom won just their second games of the tournament on Tuesday — won’t be known until late Wednesday night, after the winners of the West Virginia and Dayton regionals are determined.

Like last year, University of Dayton Arena will play host to TBT Championship Week (it was held in Columbus in 2020), which starts with a trio of quarterfinals on Thursday and Friday and concludes with the championship game on Aug. 2. But in another scheduling quirk, the Aftershocks (favored by 1.5 points at both BetRivers and DraftKings, with the over/under set at 141.5 at both mobile sportsbooks) will face the Gutter Cats in Wichita on Wednesday night in the first of four quarterfinal games.

From a championship futures standpoint, this can mean that a superior team that hasn’t advanced as far an an inferior team at a given juncture can have artificially long odds to claim the $1 million prize, and vice versa.

Case in point: Prior to the start of the tournament, DraftKings had TMT as the second favorite to win it all at +550 behind Boeheim’s Army (Syracuse alumni, upset in the second round), while Florida TNT was assigned 6/1 odds to claim the title. Now, with TMT still needing to get by Red Scare, a team of Dayton alums playing on their former home floor, to reach the quarterfinals, Florida TNT, which has already advanced to TBT’s Elite Eight, is favored to win the title at +290, while TMT is +425.

Hence, if a bettor likes TMT’s chances as much as DraftKings did heading into the tournament, that action would be best grabbed prior to Wednesday’s 7 p.m. ET tipoff, where TMT has been installed as a 4-point favorite at both BetRivers and DraftKings to emerge from the Dayton regional. (In Wednesday’s other regional final, Best Virginia, a team comprised mainly of West Virginia alums, is favored to beat the Bucketneers — Eastern Tennessee State University alumni — by 3.5 points.)

TMT’s roster is relatively chockablock with name-brand talent, and Fredette — the former BYU star and lottery pick who quickly flamed out in the NBA before enjoying a highly productive career overseas — is the tournament’s leading active scorer at 25 points per game, having sunk a game-winning 3-pointer in Tuesday’s 92-75 victory over Men of Mackey.

But despite their underdog status, the Red Scare, paced by former Flyer guards Jordan Sibert and Scoochie Smith, will be an overwhelming crowd favorite at University of Dayton Arena on Wednesday night. The region’s No. 3 seed rode that emotion to a 62-56 upset of the second-seeded Golden Eagles (Marquette alumni) on Tuesday night, and if you value the fact that Red Scare won’t have to go anywhere should they make it to Championship Week, their TBT title odds of 16/1 ought to look pretty juicy right now.