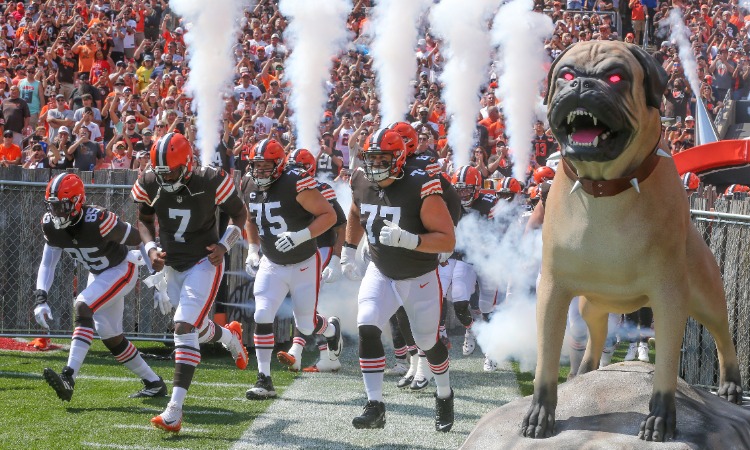 With a Thursday night matchup against AFC North rival Pittsburgh, the Cleveland Browns don’t have time to feel sorry for themselves after gift-wrapping a win to the New York Jets Sunday.

The Browns blew a chance at entering this prime-time matchup with the Steelers undefeated and riding early season momentum into a divisional contest. A complete team collapse against the Jets led to the Browns losing a 13-point lead late in the game and suffering a 31-30 defeat.

In spite of what is being called one of the worst losses in recent Browns history, the sportsbooks still like Cleveland (1-1) to top Pittsburgh (1-1) at FirstEnergy Stadium.

Cleveland liked by the sportsbooks

DraftKings, BetMGM, FanDuel, and Caesars Sportsbook all have the Browns as 4.5-point favorites. DraftKings has the moneyline at -195 for Cleveland while BetMGM lists -200, with both at +165 on the Steelers. It’s expected to be a low-scoring game, with many sportsbooks setting the over/under as low as 38 points and BetMGM and FanDuel going a tick higher to 38.5.

BetMGM has Nick Chubb at +400 to score the game’s first touchdown.

Wagering on sports in Ohio won’t be legal until Jan. 1, 2023. Until then, Ohioans must travel to a neighboring state that already has sports betting in place.

Nick Chubb decided to run this in for a TD rather than slide down.

Pittsburgh is also coming off a loss after opening the season with a victory. The Steelers suffered their setback when New England pulled out a 17-14 road victory.

So, both teams are looking to rebound from disappointing defeats.

The Browns were in control of their game with the Jets for the better part of the four quarters behind quarterback Jacoby Brissett. They led 30-17 late and appeared to be on their way to remaining undefeated, but mistakes committed in all three phases of the game proved costly down the stretch.

Chubb rushed for 87 yards and scored three touchdowns, his last with 1:55 left in the fourth quarter. Instead of that score, he could have taken a knee after gaining enough yards for a first down. Cleveland could have run out the remaining time in the game since the Jets had used all their timeouts.

Browns kicker Cade York was wide on the extra-point try and the Jets went on to score two touchdowns within 60 seconds to take a one-point lead. Brissett, who completed 22 of 27 passes for 229 yards, was intercepted late to end any hopes of a comeback.

The Steelers enter the game looking for more offense after failing to find any consistency in the loss against the Patriots. Steelers quarterback Mitch Trubisky completed 21 of 33 passes for only 168 yards, including one touchdown and one interception. Najee Harris was held to 49 rushing yards on 15 carries by the Patriots.