Struggling Browns deemed challenged to beat Brady and Bucs, even at home 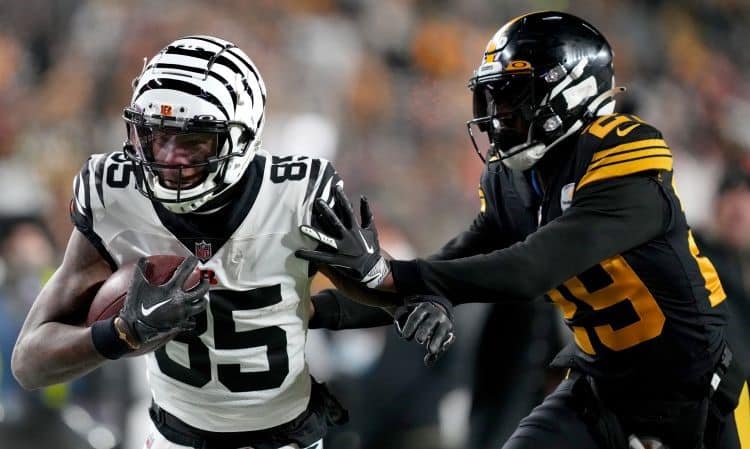 The oddmakers see the Bengals and Browns in a couple of competitive contests Sunday afternoon, with Cincinnati a slight road favorite at Tennessee and Cleveland a small home underdog versus Tampa Bay.

The Bengals-Titans tilt in Nashville will be the marquee matchup of Sunday’s NFL slate, as the only game involving two teams that are both solid playoff contenders.

In hosting Tom Brady’s Buccaneers, the Browns will try to stanch the bleeding of a season that has gone sour with losses in six of Cleveland’s last seven games.

While Ohioans have to await the first day of 2023 for the chance to wager legally at a multitude of online and in-person sites around the state, they could cross state lines to get a jump and use any of a range of major online sportsbooks offering odds on the games, with top options covered below.

The Bengals (6-4) didn’t have an easy time Sunday in Pittsburgh, trailing the Steelers at halftime, but they came back with a strong second half for a 37-30 win. They kept on pace with the Baltimore Ravens, whom they trail by a game in the AFC North.

The Titans (7-3) are in a different competitive situation in the AFC South, which is to say they don’t have much competition at all. They have a three-game divisional lead after beating the Green Bay Packers in their last game, a 27-17 win on Thursday, Nov. 17.

Interestingly, both teams have rebounded from disappointing and unexpected 0-2 starts to their seasons. Their own last meeting was a consequential one — a 19-16 Bengals victory at Nissan Stadium in the divisional round of last year’s playoffs that helped propel Cincinnati to the Super Bowl.

The Tennessee Titans want to make it abundantly clear that under no circumstances are they interested in getting revenge, talking about revenge, feeling validated by revenge or experiencing revenge in any way. https://t.co/GFwaL0iOf8

While Tennessee has the better record after winning seven of eight games and is playing at home, the oddsmakers seem never to give the Titans much respect.

The major sportsbooks such as FanDuel and Caesars all had Cincy favored by 1.5 points as of Wednesday morning, and a Bengals backer betting the moneyline could get the best return by using the -120 offered by BetMGM. The over/under for the 1 p.m. game was set at 42.5 across the board.

The big hope for the Bengals — though not officially announced as of Wednesday — was that Ja’Marr Chase would be back after missing several games with a hip injury. Without him, Joe Burrow found Tee Higgins nine times for 148 yards against the Steelers as part of Burrow’s 355-yard, four-touchdown passing day. Also uncertain, but potentially critical, was whether Joe Mixon would return from a concussion suffered versus the Steelers.

Ryan Tannehill rarely puts up any gaudy numbers (even though he did against Green Bay) while credited with solid game management that helps his defense and the NFL’s rushing leader, Derrick Henry, produce wins. Against the Packers, Henry ran 27 times for 87 yards and a touchdown and also leaped into the air on a fake running play to throw a TD pass of his own.

One last game before Watson’s eligible

The Browns have just one more game to play on Sunday before Deshaun Watson can begin his Cleveland career after the quarterback’s 11-game sexual misconduct suspension ends. While the Browns have been losing without him, it’s hard to pin the blame on Jacoby Brissett, who threw for 342 yards and three TDs in Sunday 31-23 loss to the Buffalo Bills in Detroit. (The game was moved from Buffalo due to a historic snowstorm, causing shakeups among bettors and sportsbooks.)

The only way the @Browns are better when @deshaunwatson comes back is if he can play defense cause that's where we need the most help!!! @JBrissett12 is a dawg and deserves to finish the season

The Browns have been plagued more by deficiencies on defense and on special teams, and on Sunday, it didn’t help that the Bills somehow held Nick Chubb to 19 yards on 14 carries.

Also a mystery is how the Bucs are able to lead a division with a 5-5 record, but that’s the NFC South for you in 2022. Tampa Bay has been playing better of late — including a 21-16 over the Seattle Seahawks in Germany before their bye last weekend — after a very shaky start to the season.

The sportsbooks nearly all had the Browns as 3.5-point underdogs for the game as of Wednesday, with PointsBet an exception by giving them just 3 points (but at even money for a Browns bettor willing to take that half-point less).

DraftKings was offering the best moneyline return on Cleveland, at +160. The points total was generally set at 43, with FanDuel and PointsBet a tad lower at 42.5.

While the Bucs have not been as dominating as in the two prior years with Brady in Florida, he remains one of the league’s top quarterbacks, even at age 45. He’s attempted more passes, 427, than anyone else in the NFL, and has all of just two interceptions to indicate any inaccuracy. His 2,805 yards on the season rank fourth in the league.