Plenty At Stake For Ohio State In ‘The Game’ 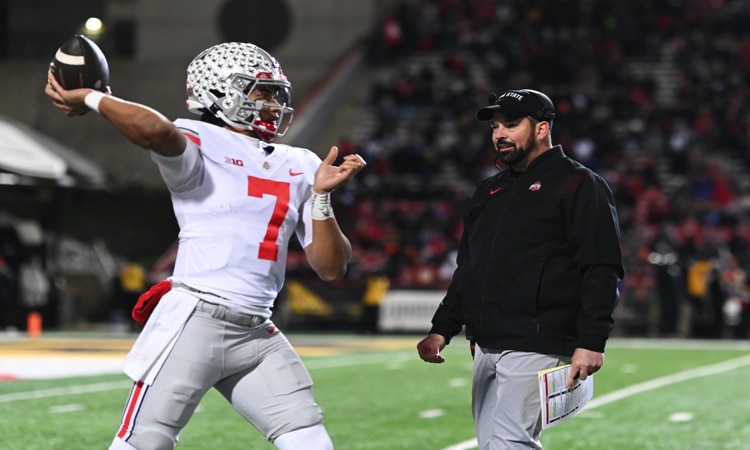 “The Game” has pretty much everything at stake this year for Ohio State and Michigan.

The No. 2 Buckeyes (11-0, 8-0 Big Ten East) and third-ranked Wolverines (11-0, 8-0 East) will settle many things in Columbus Saturday, with their highly anticipated annual showdown marking the first time since 2006 that both teams enter unbeaten. Most importantly, the winner will remain unbeaten, wrap up the East Division title in the Big Ten, and advance to the conference title game.

Regardless of who wins, Michigan or Ohio State will be the prohibitive favorite to win Dec. 3 at Lucas Oil Stadium in Indianapolis while all but assured of a spot in the College Football Playoff (CFP) as a deserved reward if 13-0 with a victory. The loser Saturday will have a full week of agonizing over what could have been, leading into a weekend of scoreboard watching to see if the right scenarios play out to possibly back into the four-team CFP. That is a longshot scenario, however, considering the Big Ten has never had two teams in the CFP in the same season since its current format started in 2014.

Ohio State has won nine consecutive home games over its archrival since a 38-26 loss in 2000, but the Wolverines did snap an eight-game overall losing streak in the series last year with a 42-27 triumph in Ann Arbor that knocked the Buckeyes out of the CFP race. It is also the only victory Michigan coach Jim Harbaugh has in six tries against Ohio State since taking over at his alma mater in 2015.

The high noon showdown has sportsbooks understandably eager to take action on the game, and the outcome will go a long way toward determining Ohio State’s bowl game, which will be available for legal sports wagering after the Buckeye State’s Jan. 1 launch.

Ohio State was involved in a one-possession game in the fourth-quarter for just the fourth time this season last Saturday at Maryland, but it scored 10 points in the final minute of a 43-30 victory. C.J. Stroud was bottled up to a degree, finishing with 241 yards and a touchdown through the air. True freshman Dallan Hayden picked up the slack with a season-high 146 yards and three scores, including an 8-yard run that gave Ohio State the lead for good on its first possession of the second half.

The Buckeyes’ defense and special teams also made key contributions. Zach Harrison had two of the team’s five sacks, and the special teams blocked a punt that provided a short field ahead of Hayden’s touchdown. Hayden is peaking at the right time with back-to-back 100-yard games, taking some of the burden off Stroud.

The Heisman Trophy candidate is enjoying a phenomenal season at quarterback, though, with 2,991 yards and 35 touchdown passes — the latter number tied for the most among FBS signal-callers. Stroud played fairly well in last season’s loss, finishing with 394 yards and a pair of scoring tosses, and with his next TD pass he will join J.T. Barrett as the only QBs in school history with 80 of them.

Stroud will be looking for Marvin Harrison Jr., who is having a breakout season with 65 receptions for 1,037 yards and 11 TDs. The sophomore did not play in last year’s matchup, seeing spot duty before making his presence known with six catches in Ohio State’s 48-45 Rose Bowl win over Utah.

The Buckeyes rank second in the nation in scoring at 46.5 points per game and have been held under 40 on just two occasions. Ohio State is tied for eighth in total yards per game (492.7) and 17th in passing yards per contest (289.2). Stroud and Harrison offer plenty of big-play potential, as Ohio State ranks third in yards per completion (14.5).

Wolverines avoid getting caught looking ahead

Michigan nearly torpedoed its CFP title hopes last weekend at home, needing to rally past Illinois 19-17 on three fourth quarter field goals by Jake Moody in the final 12:31. The Wolverines held the Illini to 54 fourth quarter yards and came up with a key fourth down stop to set up the second field goal drive.

Harbaugh has a Heisman Trophy candidate on offense in running back Blake Corum, who has 1,457 yards and ranks second in the Big Ten with 18 rushing touchdowns. His availability Saturday is uncertain, though, due to a knee injury suffered against Illinois while totaling 108 yards for his eighth consecutive 100-yard game.

Corum made the most of his few touches against Ohio State last year with 87 yards on just six carries. Donovan Edwards could be No. 2 on the depth chart, but he missed the Illinois game with a hand injury and also has an unknown status for this matchup.

But the Wolverines’ bread and butter is their defense, which ranks No. 2 in the country at 11.7 points allowed per game and fifth in passing yards allowed (161.7). Sophomore defensive back Rod Moore has three of Michigan’s eight interceptions, and Mike Morris has 7.5 of the team’s 31 sacks.

Michigan’s offense is not as prolific as Ohio State’s, but it has shown plenty of effectiveness. The Wolverines are ninth in the country in scoring at 39.4 points per game and averaged 36.7 points in their three road wins at Iowa, Indiana, and Rutgers.

There was surprising lockstep in early betting lines this week, as practically every major sportsbook installed the Buckeyes as 7.5-point favorites. The Kambi platform powering BetRivers and Barstool Sportsbook came off that number Wednesday, moving Ohio State to -8 at -109.

Everyone else — WynnBET, Hard Rock, FanDuel, PointsBet, DraftKings, Caesars Sportsbook — has stayed at Ohio State -7.5 at -110, though FanDuel recently lowered its price from -114. BetMGM was the only notable book off the -110 common price, checking in at -115.

Kambi’s move to Ohio State -8 lengthened the range of moneyline offerings. FanDuel and DraftKings are offering the best value at -295 and are the only books under -300. Hard Rock and BetMGM are at the number, with Caesars, PointsBet, and WynnBET right behind the pair at -305. BetRivers and Barstool are now offering -335 with that half-point jump.

The over/under is where the greatest variety can be found, ranging in half-point increments from 56 to 57.5. PointsBet, WynnBET, and DraftKings are all on the low end, with DraftKings offering a -115/-105 split in contrast to the standard -110.