Ohio State Is Huge Odds Favorite On Road Against Maryland 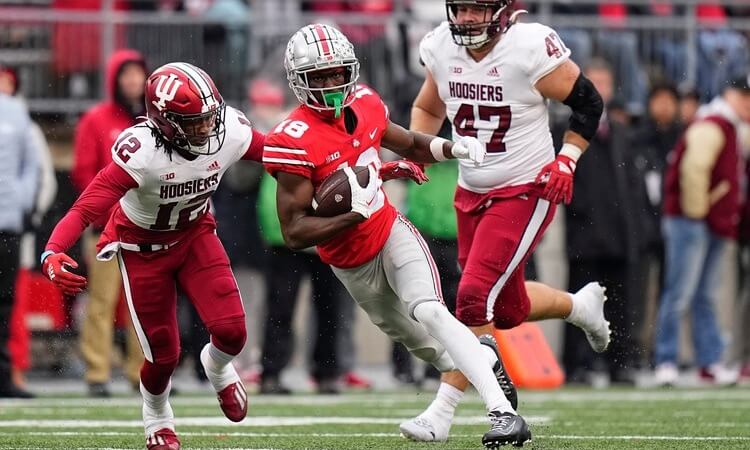 When Ohio State’s offense plays its best, watching the Buckeyes is a treat. In Saturday’s 56-14 win over Indiana, the home fans were dazzled.

C.J. Stroud threw for a ho-hum 297 yards and five touchdowns. No wonder he’s the Heisman frontrunner (+125 at FanDuel).

The 10-0 Buckeyes also added 340 rushing yards and three touchdowns, with every rushing touchdown coming from a different player. In the end, Ohio State finished with over 600 yards of total offense.

So far this fall, Ohio State has scored at least 40 points in every Big Ten game except one. That one game, a 21-7 win over Northwestern, featured extreme weather conditions. Can anyone other than Mother Nature slow down Ohio State?

Terps on their backs

Oddsmakers don’t see Maryland (6-4, 3-4 Big Ten), which just lost to Penn State 30-0, being the team to stop the Buckeyes this weekend.

Despite being the road team, Ohio State is a 27.5-point favorite at most mobile sportsbooks, including BetMGM, Caesars Sportsbook, DraftKings, and FanDuel. Those operators are among the national online sportsbooks with odds on the game, but Ohioans can’t bet legally in the state until a Jan. 1 sports wagering launch overseen by the Ohio Casino Control Commission.

The total for the game is listed at 63.5 points at most sportsbooks. At times this season, Maryland’s offense has looked dynamic. The Terrapins scored 56 in a win over Charlotte, 34 in a win over SMU, and 27 in games against Michigan and Michigan State.

The last two weeks, however, Maryland scored just 10 points combined against Wisconsin and Penn State. Quarterback Taulia Tagovailoa failed to throw for even 100 yards in either of those losses.

Maryland needs a bounce-back performance just to hang with Ohio State on Saturday. The Buckeyes have won all of their games by at least 10 points and have blown out most of their opponents.

While the matchup against Maryland isn’t expected to be competitive, there’s potential for an undefeated showdown between Ohio State-Michigan on Nov. 26. While the Buckeyes are heavy favorites against Maryland, Michigan is more than a two-touchdown favorite this weekend against Illinois.

The winner of the OSU-Michigan game would be a win in the Big Ten title game away from making the College Football Playoff. Depending on results elsewhere across the country, the loser of OSU-Michigan may even sneak into the CFP.