The team's early November schedule could feature some Buckeye blowouts 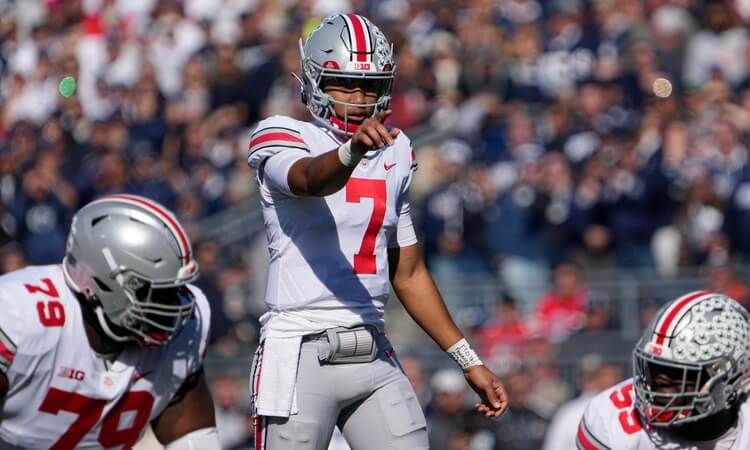 This season’s initial College Football Playoff rankings were unveiled Tuesday, and Ohio State checks in at No. 2. The undefeated Buckeyes (8-0, 5-0 Big Ten) are deserving of the ranking, having won all eight of their games by double digits, including a 44-31 road win over Penn State.

Ohio State appears on a collision course with No. 5 Michigan, as the two teams will meet on Nov. 26 in Columbus, with the winner seemingly destined to make the College Football Playoff.

Before that meeting, however, the Buckeyes have three Big Ten games ahead of them.

Late November should be intriguing for Ohio State fans, as the Buckeyes play at Maryland (6-2) on Nov. 19 before the Michigan game on Nov. 26. Late November isn’t here yet, though, and Saturday’s game against Northwestern could be a snoozefest.

Ohio State is a clear-cut CFP contender, and Northwestern is an abysmal 1-7. The Wildcats have lost 13 of their last 14 games dating back to last season, and they’ve dropped seven in a row this year after an opening win over Nebraska in Ireland.

It shouldn’t come as a surprise that Ohio State is favored by more than five touchdowns at most sportsbooks. The Buckeyes are 38-point favorites at BetRivers, Caesars Sportsbook, DraftKings, and PointsBet, while FanDuel has the Buckeyes as a 38.5-point favorite. Most sportsbooks have the total sitting at 55.5 points. (These regulated sportsbooks aren’t operational inside Ohio’s borders yet, but they will be starting Jan. 1.)

It would be a surprise if the Wildcats keep Saturday’s contest competitive, although subpar weather could impact Ohio State’s high-powered offense.

Ryan Day said Ohio State is preparing for rain and wind conditions for Saturday's game at Northwestern. Gusts could reach 40 mph in Evanston.

"That's why you have balance in game planning, because in November, the weather is unpredictable in the Big Ten."

Ohio State’s star quarterback C.J. Stroud is a top NFL Draft prospect and a Heisman Trophy candidate. Stroud is among the favorites to win the prestigious award, with only Tennessee’s Hendon Hooker boasting shorter odds. FanDuel lists Hooker at +100 to win the Heisman, while Stroud is +200.

Michigan’s Blake Corum, one of the most productive running backs in college football, is another contender. FanDuel lists Corum at +1400 to win the Heisman.

Given Corum’s productivity, the regular-season finale between Ohio State and Michigan could have more than playoff implications at stake. Stroud and Corum could very well be jockeying for Heisman positioning throughout the major rivalry game.