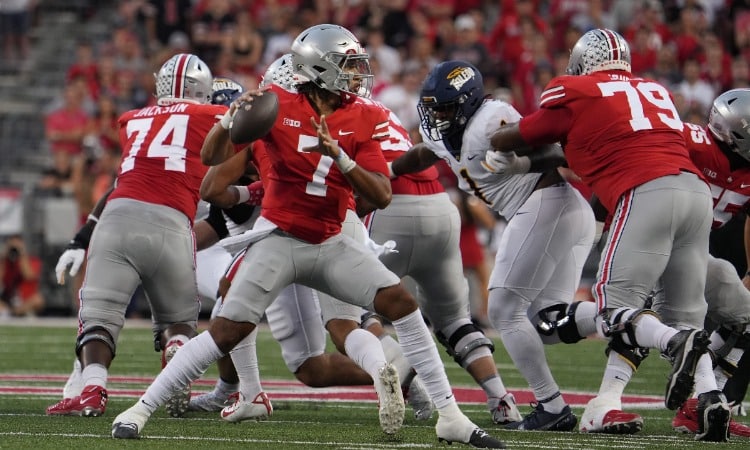 Third-ranked Ohio State begins Big Ten play on Saturday night, and they do so as nearly three-touchdown favorites against unranked Wisconsin.

But the Badgers will enter Ohio Stadium looking to prove the odds wrong against a Buckeyes team that hasn’t always looked untouchable this season. Ohio State looked sensational the last time it took the field, rolling to a 77-21 drubbing of Toledo. In wins over Notre Dame (21-10) and Arkansas State (45-12), however, the Buckeyes weren’t as impressive.

Which Buckeyes team shows up against the Badgers will provide some insight into whether the team favored to win the Big Ten championship is making steady improvements as the season progresses or is still struggling to find its way.

Buckeyes favored by 18.5 or more

The sportsbooks clearly like the Buckeyes to take care of business against a Badgers team coming off a 66-7 blowout of New Mexico State. Ohio State failed to cover the point spread in its first two games but had little trouble doing so against Toledo.

Buckeyes fans can’t yet place a legal wager in Ohio on the game yet, or on any sporting event for that matter. That changes Jan. 1, 2023, the universal launch date for sports wagering in Ohio. Until then, Ohio residents must go to a neighboring state where sports betting is up and running if they want to place bets.

In terms of player props, Caesars Sportsbook has the over/under at 3.5 total passing touchdowns by Buckeyes quarterback and Heisman favorite C.J. Stroud, while going much lower at 1.5 for Badgers quarterback Graham Mertz.

In comparing their top running backs, the sportsbook has the over/under at 87.5 rushing yards for Wisconsin’s Braelon Allen and 70.5 for Ohio State’s TreVeyon Henderson. Allen is a talented sophomore who rushed for 1,268 yards as a freshman. He’s rushed for 334 yards on 50 carries, including five touchdowns, during the Badgers’ first three games this season.

NBA superstar LeBron James, a longtime Ohio State fan dating back to his days growing up in Akron, certainly recognizes the importance of getting off to a good start in Big Ten play. SI.com reported that James had Beats by Dre Studio3 Wireless headphones, along with a note of encouragement, delivered to the Buckeyes ahead of this week’s game against the Badgers.

UPDATE: The King Has Delivered.. Lebron has gifted the Ohio State Buckeyes Football Team Custom Beats/ headphones for all there hard work Thank You @KingJames 🔥🔥🌰

The Buckeyes have outscored their three opponents by an average of 33 points. They’ve not allowed any of their opponents to score a point in the fourth quarter, establishing a 28-0 advantage on that front through three contests. Miyan Williams leads the Buckeyes in rushing with 207 yards on 32 carries while Henderson has added 197 yards on 29 totes.

But it’s the Buckeyes’ passing attack that figures to be the key in determining the outcome Saturday. Stroud has passed for 948 yards, including 11 TDs. He’s thrown five TDs to Marvin Harrison Jr., who has 18 catches for a team-best 342 receiving yards. Emeka Egbuka has a team-high 20 receptions for 324 yards, including three TDs. Jaxon Smith-Njigba, the top returning receiver from last season, has started slowly due to injury. He’s played in two games, catching four passes for 34 yards.