Former Bearcat "Sauce" Gardner leads a solid list of NFL Draft prospects from Ohio who hope to have their names called in Vegas. 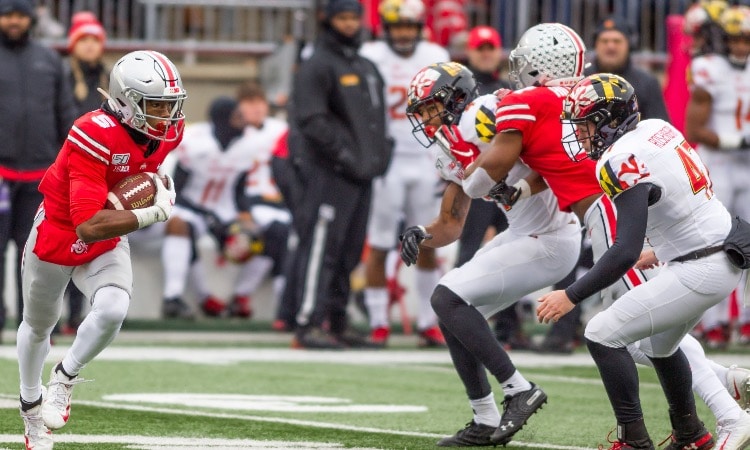 The 2022 NFL Draft is finally here, and prospects across the Buckeye State are hoping to hear their names called at some point during the seven rounds scheduled to take place over three days in Las Vegas, beginning with Round 1 on Thursday evening.

But how many will hear their names announced in the first round? How many Ohio State players will be among those first-round selections? And who will be the first player from an Ohio program to be selected in the draft?

Here’s a look at some prospects from Ohio colleges who could be chosen in the early rounds, along with where various sportsbooks anticipate they’ll land.

Garrett Wilson – The former Buckeyes wideout tops the list for the first wide receiver expected to be taken in the draft. FanDuel has odds of -125 on Wilson being the first pass catcher selected, while DraftKings has odds of -110 on him being the No. 1 receiver taken. He enters the draft coming off a collegiate season in which he caught 70 passes for 1,058 yards, including a dozen touchdowns.

Chris Olave – DraftKings has odds of +1800 on this former Buckeye being the first wide receiver to be drafted, which ranks fourth among a deep list of wideouts (including his aforementioned teammate) available in this year’s draft. Meanwhile, FanDuel lists odds of +2500 on Olave being the first wide receiver selected. Considered a game-breaker because of his ability to outrun defensive backs, he posted 65 receptions for 936 yards, including a team-leading 13 TD receptions last season for Ohio State.

A behind-the-scenes look at how @chrisolave_ has been preparing for the #NFLDraft. 👀 (by @sleepnumber)

Jeremy Ruckert – DraftKings lists this former Buckeye with odds of +500 to be the first tight end taken. Only UCLA’s Greg Dulcich (+200) and Colorado State’s Trey McBride (+450) have better odds. For its part, FanDuel has odds of +1100 on Ruckert being the first tight end being taken after posting career-bests 26 catches for 309 yards, including three scores last year for Ohio State.

Ahmad “Sauce” Gardner – He will be one of the first defensive players selected and is projected by most sportsbooks to be the No. 1 defensive back picked. DraftKings has odds of -175 on the former Cincinnati standout to be the first defensive back chosen, while FanDuel has odds of -200 — tops on both lists. DraftKings has odds of +1800 on Gardner being the No. 2 overall pick, while FanDuel has odds of +3000 on him going No. 2 overall. In three years as a Bearcats starter, Gardner didn’t allow a single touchdown, while being in on more than a thousand plays.

The Lions reportedly love Sauce Gardner. But is he really a fit at No. 2? https://t.co/yNt7kAhFRT

Desmond Ridder –  FanDuel and DraftKings have odds of +1000 on the former Cincinnati standout being the first quarterback taken in the draft. Only Liberty’s Malik Willis (-190 DraftKings, -200 FanDuel) and Pittsburgh’s Kenny Pickett (+170 DraftKings, +200 FanDuel) have better odds. DraftKings also has odds of +2000 on Ridder becoming a Top 10 pick after having a stellar career that included leading the Bearcats to their first 13-win season and a spot in the College Football Playoffs. He  passed for more than 10,000 yards during his college career, including a school-record 87 touchdowns. He also proved to be a winner, leading Cincinnati to a 44-6 record as a starter.

Alec Pierce – Pierce, Ridder’s top target last fall, has odds of +5000 at FanDuel to be the first wideout taken, while DraftKings has even longer odds of +10000 on him being the first receiver drafted after recording a team-best 52 catches for 884 yards, including seven TDs last fall for Cincinnati.

Bryan Cook – DraftKings has odds of +5000 on the former Cincinnati playmaker becoming the second safety chosen in the Draft, which ranks him with the sixth-best odds for the position. He tallied 93 tackles, including 5.5 for loss, nine pass breakups, and two interceptions last season for the Bearcats.

Tycen Anderson – DraftKings lists odds of +7500 on the former Toledo standout with 4.36 speed becoming the second safety selected in the Draft. He recorded 44 tackles, two pass breakups, and a sack last season for the Rockets.