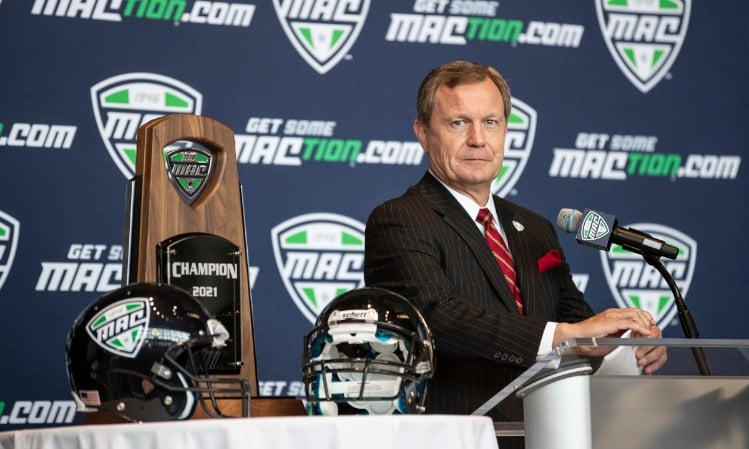 Mid-American Conference Commissioner Jon Steinbrecher thought shortly after PASPA was repealed in 2018 that the time was right for college athletic officials to start thinking more positively about sports wagering.

Steinbrecher’s viewpoint helped lead to the MAC forging a five-year partnership with Genius Sports, a data management company that will manage and distribute official MAC statistics in real time for a fee to sports betting companies. The deal, which is the first of its kind involving a college conference and a data management group, could potentially boost the mid-major conference’s revenue.

“I thought that this was an opportunity to get sports betting in the collegiate space, out of the dark corners,” Steinbrecher said. “We know it’s going on on our campuses. We know it’s going on in our communities. Let’s get it out. Let’s regulate it. Let’s bring sunshine and transparency to it. We’re in the early stages of that evolution. I think it’s the right thing. I think it will assist us in our integrity. We’ll do a better job around all of those things.”

The Mid-American Conference was the first to jump in, licensing the rights to its data and statistics to a company called Genius Sports, which will in turn sell it to sportsbooks. https://t.co/1RwZdtnL50

During the era of Name-Image-Likeness (NIL), college conference realignments, and COVID-19, Sadin believes the timing was right for the MAC-Genius data deal.

“I think, really, at the beginning of 2020, COVID, sort of certainly helped accelerate the process,” Sadin said. “We’ve now seen a couple of partnerships. We’ve already seen couple of data licensing deals. I think we’re about to see, frankly, a waterfall of partnerships coming to the forefront.”

MAC in early on the action

The MAC and Genius Sports announced their partnership plans back in March. The deal received plenty of attention, particularly from officials in other conferences. To this end, Smith said Sun Belt officials are exploring a potential data deal similar to the MAC-Genius pact.

“We were excited for a fellow conference to enter into that agreement,” Smith said. “We had some information that it was going to be happening and didn’t want to be too far behind, to be honest with you.”

The MAC is made up of a dozen universities in the Great Lakes region that extends from Illinois to New York. However, a half-dozen (Akron, Bowling Green, Kent State, Miami, Ohio, and Toledo) are located in the state of Ohio and three more (Eastern Michigan, Central Michigan, and Western Michigan) are from Michigan. (Sports betting in Ohio is scheduled to commence on the universal launch date of Jan. 1, 2023.)

The Genius deal didn’t take place overnight. Steinbrecher met with university board members and student-athletes at schools across the MAC to discus the idea of partnering with a data management group.

“We got there, but this wasn’t a quick decision,” Steinbrecher said. “This was a yearlong process. It started with me going to my board presidents and saying, ‘Can I do a corporate partnership with a casino or a sports wagering entity?’ We had institutions that have those types of relationships. Many of the institutions had partnerships with the state lotto, things like that. It took us some time to work through that.”

The MAC teaming up with Genius Sports made plenty sense to Wells, who feels that the conference’s weeknight football schedule makes it unique.

“The schools in the Mid-American Conference play midweek, so that differentiates them from the Saturday rush,” Wells said during the panel discussion. “They’re playing on Tuesdays and Wednesdays and Thursdays. At that time, that’s the only football games going on in the country. So, if you’re looking for content, you’re looking for sponsorable assets. It’s very uniquely positioned.”

The Sun Belt Conference includes 14 universities located in Texas, Alabama, Georgia, Louisiana, and Arkansas. Similar to the MAC, some league officials would not have considered doing any business with sports betting brands a few years back. But times have changed.

“The Sun Belt is housed in the Superdome in New Orleans,” Smith said. “When that name changed to [the] Caesars [Superdome], I think we were a little bit nervous, like, ‘Gosh, are we going to still be here?’ That was only a year ago and to fast-forward six months, to even be engaged in these conversations just shows how the conversation has changed.”

For Steinbrecher, time will tell if his plan to team up with a data management company was a good move for the MAC, and if it will represent the starting point for similar partnerships across the college sports landscape.

“For us, we’re now going to be able to provide for whomever would like it, the data quicker, more accurate, and be a part of the oversight,” Steinbrecher said. “We’ll see where it transforms to. Give us two years, five years, 10 years.”