What’s good for Mobley’s odds could be bad for the Cavs, however 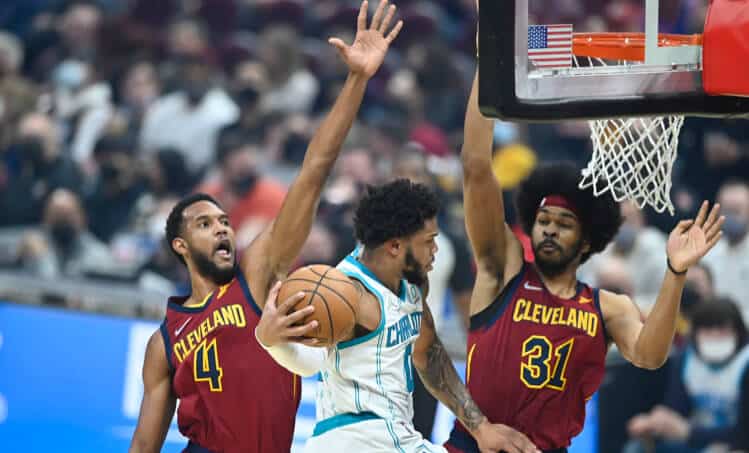 Football season’s right around the corner, which means it’s time to take a long, hard look at the futures market for Defensive Player of the Year — in the NBA.

Seriously, though, while the NBA regular season is still months away, something peculiar is afoot, at least at FanDuel and Caesars, in regard to bettors’ outsize enthusiasm for second-year Cavs big man Evan Mobley, whose DPOY odds currently range from 25/1 (Caesars and PointsBet) to 28/1 (FanDuel) and are either even with or slightly shorter than those of teammate Jarrett Allen.

At FanDuel, there 12 players with shorter odds to win the award. Yet late last week, the sportsbook reported that Mobley was tied with DPOY favorites Rudy Gobert (5/1) and Robert Williams (8/1) for highest percentage (9%) of bets placed. In terms of handle, Mobley (12%) was third behind Gobert (25%) and Bam Adebayo (16%, 7/1).

“Mobley looked really good as a rookie and we expect him to take a step forward, but I don’t think he’s in that top 6 or 7 echelon of defenders — yet,” observed Fenstermaker.

PointsBet Head of Trading Jay Croucher is more bullish on Mobley’s defensive prowess, saying, “I think people are looking at him as though he’s like young Kevin Garnett in terms of his defensive impact. There’s basically no track record of a guy being as good as he was in his first season. This guy could very well be the best defensive player in the NBA for five years or so.”

Evan Mobley's defensive versatility was on full display against the Hawks last night. Changed so many shots around the rim, especially with his left hand. Really comfortable sliding on the perimeter with wings and guards alike. Connects the dots on both ends of the floor. pic.twitter.com/wGYFUXEiFU

So why the long price? Blame it on Mobley’s teammates.

“The reason we’re happy to take bets on Mobley is Jarrett Allen takes away a lot of his credit,” said Croucher. “Voters are always looking to attach singular credit for a team. I think that hurt [Spurs teammates] Tim Duncan and Bruce Bowen back in the day. They were the best interior and perimeter defenders in the league, but they played on the same team. I don’t think Duncan ever won the award, which is ludicrous.

“If there are two guys who are really good, it’s really difficult to assign credit. [Last season’s DPOY] Marcus Smart, he really benefited from Robert Williams getting injured late in the season. Someone like Bam Adebayo and Rudy Gobert, they are so clearly the No. 1 defenders on their team, it’s really easy to assign credit.”

But while Mobley and Allen are regarded as exceptional defenders, that’s not the case with the rest of Cleveland’s rotation.

“With this award, you have to be on a top 3 or top 5 defense,” explained Croucher. “You have to go back to [Denver’s] Marcus Camby in 2007 to find someone who wasn’t on a top 5 defense. The Cavs are playing a lot of guys — Kevin Love, Lauri Markkanen, Collin Sexton (assuming he stays in Cleveland) — who aren’t good defensively, so I think there are other teams likelier to finish in the top 3 or 5 than they are.”

After spending his entire career with the Utah Jazz, Gobert was recently traded to Minnesota, which boasted a middling defensive unit last year. Which begs the question: Could Croucher’s top 5 argument hurt Gobert’s chances of tying an NBA record with his fourth DPOY award?

That’s unlikely, said Croucher, who thinks the Timberwolves could have the league’s second-best defense behind Boston next season.

“[The Jazz] had Bojan Bogdanovic and Mike Conley and these training cones for people to go around,” said Croucher. “I think Gobert is the best defensive player in the past 15 years. The Jazz were still elite with Gobert on the court despite what they had. If you play big in the regular season, it makes your defense better. Having Gobert and [fellow 7-footer Karl-Anthony] Towns as a tandem during the regular season will be awesome defensively. You don’t get Steph Curry isolating on Towns play after play. That’s a playoff thing.”

For Mobley to pull off an upset and win the award, Fenstermaker thinks it will come as a result of the same “lightning in a bottle scenario that helped Smart last year.” That would entail a whole lot of his rivals — including Allen, who hasn’t drawn much bettor interest to date — getting hurt, just as Adebayo, Williams, and Draymond Green were on the shelf for long stretches last season, torpedoing their candidacies.

At the outset of last season, Caesars had Smart priced at 100/1 and wound up losing “into six figures on the market,” according to Fenstermaker. Other books, including PointsBet, opened Smart as long as 200/1 to win DPOY, but PointsBet achieved “a good result” in the market, said Croucher, by making timely, aggressive price adjustments on certain contenders — including Smart — as the season played out.

“We were always trying to lay Gobert and [Mikal] Bridges because there were flaws in their cases,” recalled Croucher. “Two years ago, we were all in on Joe Ingles winning Sixth Man of the Year and we took a bath when [Jordan] Clarkson won. Last year, it was a weak [DPOY] field and no one wanted to vote for Gobert. We were just looking around and, defensively, the biggest story of the league was Boston, and we were always pretty short on Smart as a result.”