New name pays tribute to Cleveland's architectural history, but oddsmakers throw cold water on the notion that it will impact bettor behavior. 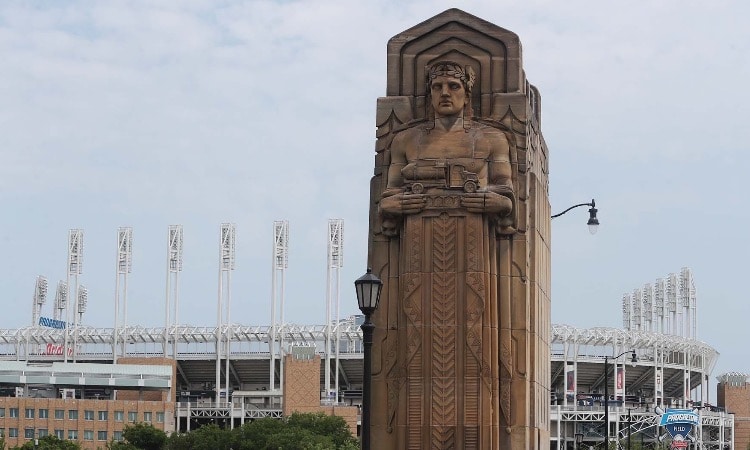 Cleveland, what’s in a name?

For the Major League Baseball team that plays its home games at Progressive Field in downtown Cleveland, a name change might erase decades of good and bad memories about Cleveland’s boys of summer. Or it could just mean new beginnings.

The latter should be the hope whenever professional baseball gets underway this spring (or summer) and the team formerly known as the Indians takes the field as the Guardians. Yet the move away from a name seen as insensitive toward Native Americans hasn’t changed the perception that Cleveland will still be one of the worst teams heading into the 2022 season. Assuming MLB owners and players will eventually reach a contract agreement and end the lockout, DraftKings lists the Guardians at odds of 80/1 to win the World Series, while FanDuel  and Caesars have them at 70/1.

“Team name changes have no effect at all on the future odds,” according to Adam Pullen, Caesars Sportsbook’s assistant director of trading. “People are usually up to speed on these changes since these are top leagues, so it’s really no secret.”

Contrary to what some might think, Cleveland’s major league team didn’t adopt the Guardians name from Marvel’s Guardians of the Galaxy. The name refers to the eight statues, known as “The Guardians of Traffic,” created in 1932 by sculptor Henry Hering that are located on both sides of Cleveland’s Hope Memorial Bridge, which is adjacent to Progressive Field.

The Cleveland baseball franchise chose Guardians as the team’s new name from a list of more than 1,100 suggestions.

Winners of 10 Central Division titles, six American League pennants, and two World Series (1920, 1948), the Guardians (nee Indians) are riding the longest drought to win a World Series among the 30 current MLB teams. (The Seattle Mariners, who played their inaugural season in 1977, have never won or so much as played in a World Series.)

Perhaps the name change could result in a change to the team’s fortunes on the field? Craig Mucklow, Caesars Sportsbook’s vice president of trading, thinks there needs to be more than a name change to move the lines at mobile sportsbooks.

“There tends to be no effect on betting as a result of a team name change,” Mucklow said. “Really, the only similar instance we’ve seen betting impact was when a team moved from a non-legalized sports betting state to a legalized one. For example, when the Raiders moved from California to Nevada, it completely changed the Nevada bias from San Francisco liabilities to Las Vegas being heavily bet.”

“The changing of both the Guardians and the [NFL Washington] Commanders team names won’t affect the way consumers wager on either to win championships or individual matchups,” Avello said. “For DraftKings in future wagering, the Cleveland Guardians are at odds of 80/1, which are not typically one of the heaviest bet teams. [They] are in the 25th position for handle taken and 20th for bets taken.

“The Commanders, at 50/1, are 26th in handle and 25th in bets. Any major news that would involve the acquisition of one of those QBs floating out there would change those odds.”