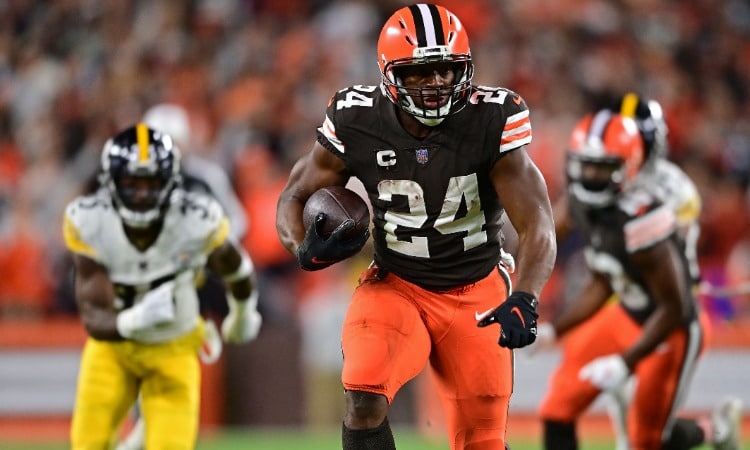 Is Nick Chubb running his way to plenty of postseason recognition as the top running back in the NFL?

Could the Cleveland Browns’ No. 1 offensive threat even be on course to winning the NFL’s Most Valuable Player award?

One thing is certain, Chubb’s presence in the Browns’ backfield is vital to Cleveland having any chance of finding team success. That’s particularly true with quarterback Deshaun Watson serving an 11-game suspension for violating the NFL’s personal conduct policy after dozens of claims of sexual misconduct during his time with the Houston Texans.

The hard-running halfback merits a lot of credit for the Browns starting the season on a high note at 2-1. If not for a late meltdown against the New York Jets, a game in which Chubb scored three touchdowns, Cleveland would be among the short list of teams still undefeated (Miami 3-0, Philadelphia 3-0, N.Y. Giants 2-0).

Chubb, who has never won the rushing title, leads the league with 341 rushing yards on 62 carries after three games. He is averaging 114 yards per game. More impressively, he’s gaining 5.5 yards per carry. If he maintains his pace, he’ll finish with 1,932 yards, the most he’s rushed for in a season. It would top his best season (1,494 yards in 2019) by more than 400 yards.

Chubb could run wild without an MVP award

Despite a fast start, Chubb is not considered a favorite by the mobile sportsbooks to win the regular season MVP award, which most often is presented to a quarterback.

FanDuel has long odds of 180/1 for Chubb to be named MVP while listing Buffalo Bills quarterback Josh Allen with the best odds at +300. The sportsbook lists Chubb’s chances behind more than two dozen other players overall, including fellow running backs Jonathan Taylor, Derrick Henry, and Christian McCaffrey. With even longer odds, Caesars Sportsbook has him at 250/1 and BetMGM lists 500/1.

FanDuel has Chubb tied with Allen and Taylor for the sixth-best odds to be named AP NFL Offensive Player of the Year at +1400, with Lamar Jackson the favorite at +600. DraftKings has Chubb at +2000.

The Browns hit the road Sunday to play the Atlanta Falcons, who have had trouble stopping the run. They’ve allowed 328 yards and 4.8 yards per carry. It’s an opportunity for Chubb to rush for more than a hundred yards for the second straight contest and third in four outings.

The 5-foot-11, 227-pound halfback is coming off a 113-yard rushing performance on Thursday that included a touchdown run in a 29-17 victory over Pittsburgh. That came after rushing for 87 yards, including three TDs, in the loss to the Jets. He opened the season by rushing for 141 yards on 22 carries in a 26-24 triumph over a Carolina team led by former Browns starting QB Baker Mayfield.

A former University of Georgia standout, Chubb hasn’t been much of a threat as a pass catcher out of the backfield, accounting for only four receptions for 28 yards this season. History says he’ll do most of his damage taking a handoff or pitch from the Browns quarterback, whether it’s Watson or backup Jacoby Brissett, who is managing the offense while Watson is out.

Cleveland drafted Chubb in the second round of the 2018 NFL Draft. He has provided a solid return on the investment by rushing for more than a thousand yards in three of his four years. He followed his 966-yard rookie campaign with annual rushing totals of 1,494, 1,067, and 1,259 the past three years and has rushed for 40 touchdowns in his career.