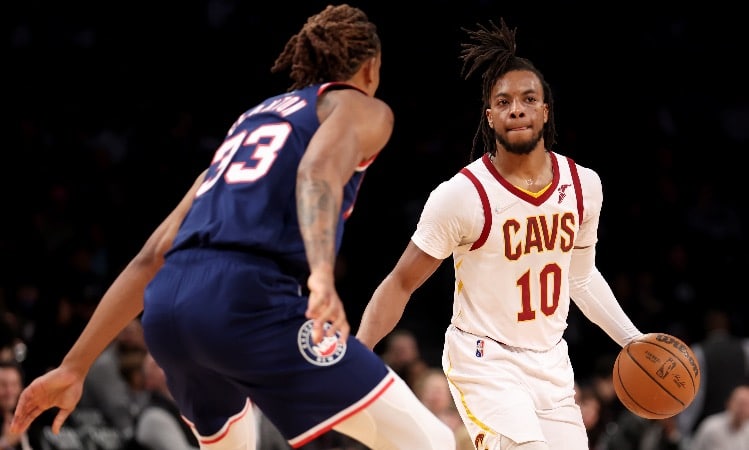 The Cleveland Cavaliers are clearly one of the NBA’s pleasant surprises this season.

They’ve exceeded expectations even before stepping on the court in Brooklyn Tuesday night for an NBA play-in matchup against a star-studded Nets team that many saw as a frontrunner to win the Eastern Conference championship.

FanDuel and DraftKings have the Cavs as 8-point underdogs against the Kevin Durant/Kyrie Irving-led Nets. The two sportsbooks list the over/under for the game at 228.5.

A loss to the Nets would not end the season for the Cavs. They would host the Charlotte-Atlanta winner in the final play-in game Friday night.

The Cavs finished the 2020-21 season with a 22-50 record, which was good for 13th place in the Eastern Conference. They closed out the 2021-22 regular season Sunday with a 133-115 blowout of the defending NBA champion Milwaukee Bucks, who sat All-Star Giannis Antetokounmpo. The win gave Cleveland a regular-season record of 44-38 and eighth place.

In doubling their win total from a year ago — the best turnaround in the NBA this year — the Cavs fought their way into postseason play, even if it ends up being only for play-in competition. The Cavs and Nets finished the regular season with identical records, but Brooklyn earned the right for the home game and seventh place in the East based on defeating the Cavaliers in three of four head-to-head meetings. In the most recent of those, Brooklyn prevailed 118-107 in a Barclays Center contest Friday.

Not finished yet. #LetEmKnow pic.twitter.com/y8VPdOVfHo

Cleveland entered the season as an up-and-coming squad led by a young playmaker in All-Star point guard Darius Garland. There wasn’t a lot of talk about the Cavs being in the playoff picture this soon, but they’re here and will take on a Nets team that was built for winning sooner, rather than later.

Garland averaged 25.3 points and 8 assists during the four meetings against the Nets during the regular season. The third-year pro averaged 21.7 points while shooting 46 percent from the field in 68 games on the year. He was the Cavs’ lone representative on the East squad in this year’s NBA All-Star Game held in Cleveland, but he joined teammates Jarrett Allen and Evan Mobley to win the Skills Challenge.

Cleveland’s frontcourt trio of Allen, Mobley, and Lauri Markkanen all are taller than 6-foot-10 and have contributed to the surprisingly good campaign.  Whenever they’re together in the starting lineup, the Cavs have outscored opponents by nearly 8 points per 100 possessions, according to NBA Advance Stats.

However, Allen, who averages 16.1 points and 10.8 rebounds for the year, has been sidelined with a fractured finger since March 6 and appears to be out for the matchup with Brooklyn. He hasn’t played in the last 18 games. Mobley played well against the Nets in two of the meetings,  accounting for 14.5 points and 6.5 rebounds, but sat out the first two meetings due to injury.

Cavs coach J.B. Bickerstaff is a deserving candidate for NBA Coach of the Year after utilizing 26 players during the season, which ranks as the second-most in team history.

The disappointing Nets haven’t been the dominant squad that many anticipated seeing this year. In fact, Brooklyn enters the play-in game with a 20-21 home record at Barclays Center.

Durant, seen by many as the best all-around scorer in the game, averaged 28.7 points, 5.7 assists, and 5 rebounds in games versus the Cavs this season. His All-Star running mate, Irving, a former Cav, played in two of the meetings against the Cavs, averaging 22.5 points, 8.5 assists, and 6.5 rebounds.

Brooklyn enters the postseason encounter without the services of versatile guard-forward Ben Simmons, who was acquired in a trade with Philadelphia involving All-Star guard James Harden. Simmons has yet to step on the court for the Nets and has been ruled out for Tuesday while recovering from a back injury.