Underdog Bengals leaning on NFL Comeback Player of the Year to lead the way to a Super Bowl LVI upset of L.A. Rams. 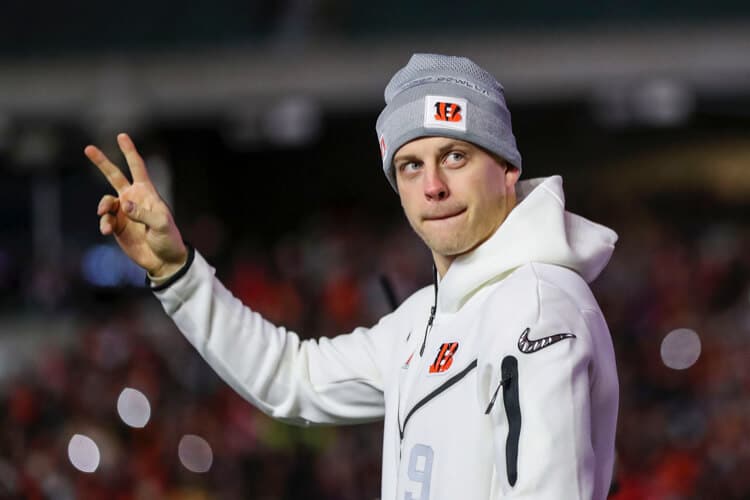 Second-year Cincinnati Bengals quarterback Joe Burrow is trending positively in a way right now that no one in their right mind would have predicted at this time a year ago.

Just two days away from the opening kickoff of Super Bowl LVI, Burrow, who missed half his rookie year with a knee injury, is receiving much more love from bettors than his Super Bowl counterpart, 13-year veteran Matthew Stafford. Some say that the Los Angeles Rams quarterback could secure his place in Canton with a Rams victory over the Bengals on Sunday.

Sports betting in Ohio was legalized on Dec. 22, but the activity is not expected to be available anytime soon. There’s still plenty of work to be done by the Ohio Casino Control Commission before it reaches the point where people can legally wager on sports. The law states that legal sports betting must be launched by Jan. 1, 2023.

Nonetheless, Burrow is attracting plenty of attention among sports bettors outside of Ohio.

“Burrow is the new kid on the block,” said Adam Pullen, Caesars Sportsbook’s assistant director of trading. “He won a national championship in recent years, so he’s more fresh. I think people like the young guy who’s coming up versus the grizzled veteran who’s been here for a while.

“Normally it takes time for a quarterback to get to the Super Bowl, but that hasn’t been the case with [Patrick] Mahomes and Burrow getting there early in their careers. So, I think he’s more exciting in that respect.”

Call it a comeback

Burrow suffered a season-ending ACL tear halfway through his rookie season in the NFL.  That meant he spent the second half of the 2020-2021 season and the offseason rehabbing a surgically repaired knee.

Yet he returned to the field this season showing no signs of rust or being hobbled. The Bengals’ signal-caller jumped right back into the team’s offensive huddle and looked even stronger en route to earning the NFL’s Comeback Player of the Year award.

What a return it was.@JoeyB is the Comeback Player of the Year! #NFLHonors (by @Bose) pic.twitter.com/dHZqDzrMTd

The Bengals are widely considered 4-point underdogs facing the Rams. Due primarily to Burrow’s likability and postseason play, however, they have become a popular pick to win the Super Bowl for some.

In particular, Houston furniture store magnate Jim “Mattress Mack” McIngvale is banking heavily on Burrow. Caesars reports that McIngvale has wagered nearly $10 million — including a record $5 million on Cincinnati’s moneyline (+170) — on the Bengals to defeat the Rams. (It’s worth noting that McIngvale hedges most of his bets with furniture promos.) The sportsbook reports that the previous biggest legal sports wager was a $4.9 million bet at -900 odds on the 2002 Super Bowl.

“Caesar — at least for the moment — is a Rams fan,” said Ken Fuchs, head of sports at Caesars Sportsbook. “With nearly $10 million invested by Mack at this point, it’s impossible to sleep on his Bengals conviction. His latest $5 million bet is the largest wager ever made.

“Bets like these are exactly why we love the Super Bowl and what we do every day, making sports more exciting for anyone who wants in — whether it’s the biggest bet in history or $10 put on the coin toss. We wish Mack the best with his play, and can’t wait for Sunday’s kickoff.”

And neither can fans of Burrow.