One sportsbook has Friday's NCAA tournament meeting between No. 7 seed Ohio State and No. 10 Loyola-Chicago as a pick'em. 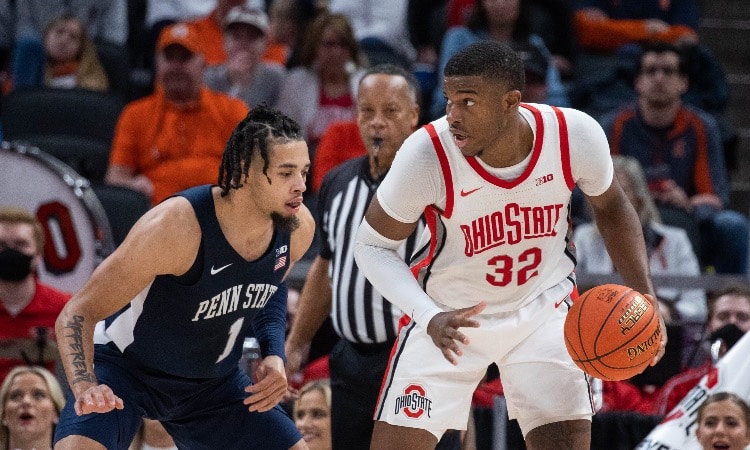 Ohio State is dancing in the field of 68 teams that make up this year’s NCAA Division I Men’s Basketball Tournament. But it looks like a near tossup whether they’ll dance for more than one game.

The No. 7 seed Buckeyes, who finished the regular season at 19-11, will meet No. 10 seed Loyola-Chicago on Friday in an East Region round-of-64 matchup at PPG Paints Arena in Pittsburgh.

A look around the listings at the various sportsbooks that are poised to launch in Ohio reveals that there is no big favorite in this one. In fact, DraftKings has the matchup as a pick’em. FanDuel makes Ohio State a 1-point favorite over the Ramblers, and BetMGM lists the Buckeyes as a 1.5-point favorite. Most books set the point total over/under at 132.5.

The sportsbooks consider the Buckeyes a longshot to win the national championship. DraftKings and BetMGM have odds of +20000 (200/1) for the team to go all the way, while FanDuel offers a slightly better payout of +25000.

Ohio State earned an at-large bid in spite of dropping four of its last five contests.

The Buckeyes are making their fourth straight NCAA Tournament appearance. They’re 4-0 all-time against the Ramblers, posting an 87-75 victory the last time the two teams met, on Nov. 11, 2006.

“It’s an incredible time of the year,” Ohio State coach Chris Holtmann said during a video call with media following the reveal of the bracket. “It’s a party that everybody doesn’t get an invitation to. We recognize that and I’m happy for our guys that they get to play meaningful games here in March.”

All-Big Ten performers E.J. Liddell (19.6 ppg, 7.9 rpg) and Malaki Branham (13.3 rpg) lead the Buckeyes. Liddell, a 6-foot-7 junior forward, has scored in double figures the past eight games. Branham, a 6-foot-5 freshman, didn’t take long to make his presence felt in the Buckeyes lineup and has averaged 19.6 points over the last nine contests.

Holtmann thinks that playing in Pittsburgh could work in the Buckeyes’ favor.

In recent seasons, the Ramblers have been a tough out in NCAA Tournament action. They’ve appeared in the NCAA Tournament three of the past five years, advancing to the Final Four in 2018 and the Sweet 16 last season.

Lucas Williamson (18 ppg, 10 rpg) and Aher Uguak (16 ppg, 10 rpg) pace a Ramblers team that claimed the Missouri Valley Conference Championship. Williamson, a 6-foot-4 guard, has been an integral part in the team’s recent success. His 124 career victories make him the winningest player in program history.

The Ramblers, winners of five of their last six games, are led by first-year head coach Drew Valentine. At age 30, Valentine is the youngest head coach in NCAA Division I men’s basketball. His 25 wins are the most in Ramblers history for a first-year head coach, and he’s the first Ramblers coach to lead Loyola-Chicago into the NCAA Tournament in his first season in charge.

“We’ve got tremendous respect for them and their play,” Holtmann said. “And their league is really good. … I think everyone is well-aware of Loyola and Sister Jean from their Final Four run.”

Sister Jean Dolores Schmidt, Loyola-Chicago’s beloved 102-year-old nun, is expected to be in attendance to provide support as she has during recent tournament runs for the Ramblers.