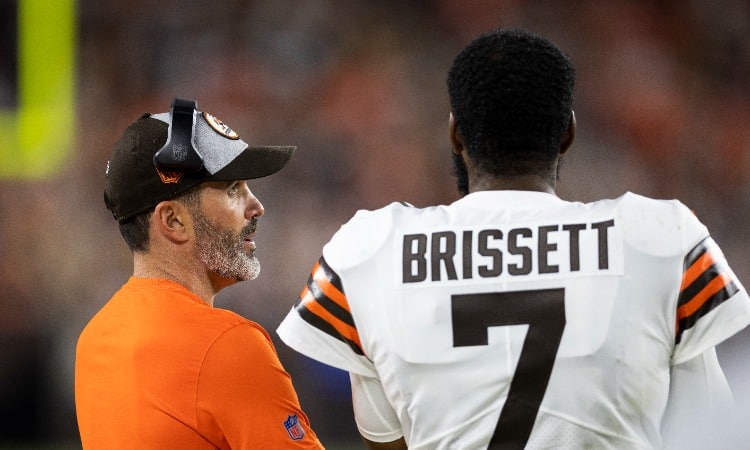 For the first time this season, the Cleveland Browns march into a matchup with a losing record.

With both at 2-3, the Browns play host to the New England Patriots and once-upon-a-time Browns coach Bill Belichick Sunday afternoon at FirstEnergy Stadium.

The sportsbooks give Cleveland a small edge as the one to get back to .500 for the season. The Browns are facing a New England team that would need to start rookie quarterback Bailey Zappe for a second week if Mac Jones isn’t able to play due to ankle injury.

The Browns and coach Kevin Stefanski still await the season’s start for quarterback Deshaun Watson, who signed a five-year, $230 million contract with Cleveland after being traded from Houston. He was suspended for 11 games due to sexual misconduct and allowed to at least return to the Browns facilities this week. By midweek, however, he was named in a new sexual misconduct lawsuit.

FanDuel and DraftKings have long odds of +5000 on Stefanski winning the AP NFL Coach of the Year Award, with both making Philadelphia’s Nick Sirianni the favorite at +150. At 5-0, the Eagles are the league’s lone undefeated team.

Stefanski’s Browns aren’t far from taking an undefeated record into their meeting with the Patriots, as their three losses are by a combined six points. With wins over Carolina (26-24) and Pittsburgh (29-17), Cleveland remains in contention in the AFC North, where Baltimore is in first place with a 3-2 record.

The Browns’ latest gut-wrenching loss, 30-28, came against the Los Angeles Chargers Sunday at First Energy Stadium. The Browns had two missed opportunities in the final two minutes to take the lead. Jacoby Brissett threw an interception in one instance, and rookie placekicker Cade York missed a go-ahead field goal try in the final seconds.

Cleveland faltered a week earlier at Atlanta, 23-20. The Browns’ toughest defeat came at home against the New York Jets, allowing New York to rally in the final minutes to score a 31-30 win after trailing by two TDs.

Brissett, who has thrown a critical late interception in each of the losses, was signed by the Browns to hold down the fort during Watson’s absence. For the season, he’s completed 103 of 161 passes for 1,060 yards, including five touchdowns.

“There are going to be moments that you absolutely have to bounce back from,” said Stefanski, reports NFL.com, “and just the makeup that Jacoby has and the things he’s seen, the things he’s been through, I have no doubt in my mind that he will be ready to go Sunday.”

The Patriots are riding some momentum coming off a 29-0 rout of Detroit, ending a two-game losing streak. But the Patriots have been far from consistent and find themselves at the bottom of the AFC East standings as the only team with a losing record. Buffalo (4-1) leads the division, followed by New York (3-2) and Miami (3-2).

The Patriots pulled off the win over Detroit with Zappe starting in place of the injured Jones. He completed 17 of 21 passes for 188 yards, including a touchdown and an interception. Like Brissett, Zappe is being asked to manage the spot until the starter is ready to assume the QB duties.

“He does a good job of seeing the game, and can come off and identify and articulate what he saw, what happened, and [he’s] usually right,” Belichick said of Zappe. “Maybe he might not have done the right thing, but he saw the game.”

Belichick, who was the head coach of the Browns from 1991-95, has been coaching in the NFL for 48 years, including 28 as a head coach. He is the only head coach to win six Super Bowls.