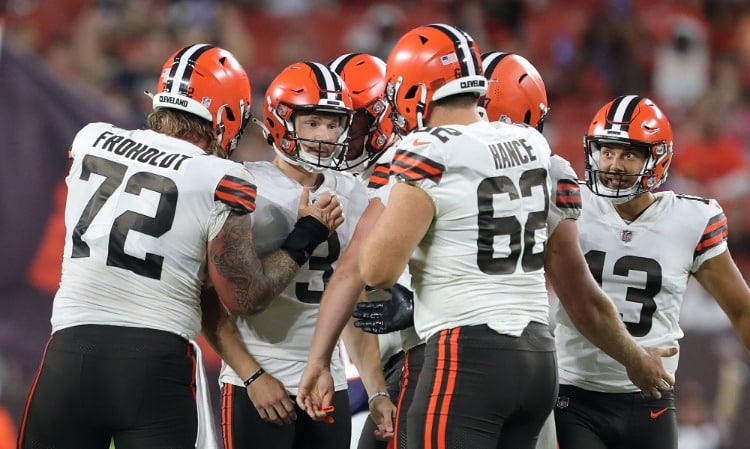 The Cleveland Browns are spending the first weekend of the NFL season in Charlotte.

For some, it’ll seem like a family reunion, as the Browns will face their former starting quarterback, Baker Mayfield, who is making his first start for the Carolina Panthers since being traded from Cleveland to Carolina in July.

Mayfield, who was Cleveland’s QB1 for four seasons after being selected No. 1 overall in the 2018 NFL Draft, earned the Panthers’ starting nod over Sam Darnold during the preseason. If the Browns want to downplay facing their former teammate and onetime offensive leader, Mayfield surely isn’t.

“Any time you’re playing guys you know, it makes it more interesting and more fun,” Mayfield said in the run-up to the opener. “You get to smack talk with buddies you’ve been with for a bit. You know how to poke and prod and get the best out of them.”

Good morning my Cleveland Browns family! The NFL started off with a bang last night and we are only 2 days away from Browns football. Will Baker get his revenge? Or will Myles Garrett and company beat the brakes off the Panthers?
I’m going with Myles and company!!#Browns #NFL pic.twitter.com/rc4SGcA9Tr

Too close to call a favorite

The sportsbooks are all over the place on predicting the outcome between the Browns and the Panthers.

DraftKings and Caesars Sportsbook recognize the contest as a pick’em game, with the over/under set at 42 points. PointsBet has the Carolina as a half-point favorite to defeat the Browns, while FanDuel has the Browns as 1.5-point favorites to win the season-opening matchup.

PointsBet also has the over/under at 42 points, while FanDuel’s total is 41.5.

The Browns head into the season without Mayfield’s expected replacement, Deshaun Watson, who is suspended for the first 11 games of the season for violating the NFL’s personal conduct policy. His backup, Jacoby Brissett, is being asked to manage the offense until Watson returns in late fall. The seven-year NFL veteran’s best season came in 2019 when he was a starter in Indianapolis, passing for 2,942 yards, including 18 touchdown passes and six interceptions.

The Queen lived 96 years and never saw the Cleveland Browns even make the Super Bowl pic.twitter.com/AKTWk9FJWO

Cleveland, considered by many as a team good enough to earn a playoff berth, has plenty of talent surrounding Brissett, who ranks as the second-worst starting QB (No. 31) in the NFL in Week One, according to The Ringer. Only Mitchell Trubisky, who was named the starter for the Pittsburgh Steelers, ranks worse at No. 32. As for Mayfield, The Ringer ranks him 20th.

But the Browns’ running game is recognized as one of the top rushing attacks in the league, with Nick Chubb, Kareem Hunt, and D’Ernest Johnson leading the way. Chubb rushed for 1,259 yards (5.5 yards per carry) last season. Hunt (386 rushing yards) and Johnson (534 yards) have also proven themselves as reliable ball carriers.

While it’s anticipated that Cleveland head coach Kevin Stefanski will lean on the ground game, particularly early in the season, wide receiver Amari Cooper and tight end David Njoku are among the best at their positions in the AFC North.

The Browns’ defense may ultimately be the strength of this team. Defensive ends Myles Garrett and Jadeveon Clowney combined for 25 sacks a year ago and will look to put plenty of pressure on their former teammate on Sunday.

Mayfield passed for more than 14,000 yards while in Cleveland, including 92 touchdown passes and 56 interceptions. Among his Browns highlights, he set the most completions by a Browns rookie QB (310) and most passing yards by a rookie (3,725). He also led Cleveland to a playoff berth in 2020.