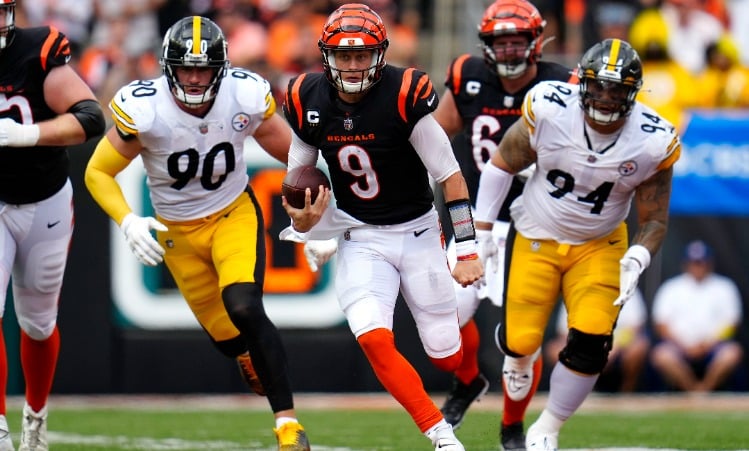 This was not the start to the season the defending AFC champion Cincinnati Bengals envisioned, as they suffered a disappointing loss in Week 1 to AFC North rival Pittsburgh before a Bengals home crowd. The Bengals had a half-dozen opportunities to knock off the underdog Steelers, but they ultimately fell to 0-1 with a 23-20 overtime defeat.

As was the case in Week 1, the Bengals are about a touchdown favorite as they try in Week 2 to correct the many miscues that denied them a winning start to the year. They’re on the road this time, taking on a Dallas Cowboys team that throughout the offseason was favored to win its division, but the sportsbooks nevertheless like the Bengals to bounce back from the loss to Pittsburgh and even their record.

Who wins Chase vs. Diggs?

The Bengals reached the Super Bowl a season ago but now appear to have a tough road just to winning the AFC North. Baltimore, Cleveland, and Pittsburgh are all a game up on the Bengals in the standings.

For Cincinnati to avoid a three-game losing streak — dating back to the Super Bowl LVI 23-20 loss to the Los Angeles Rams — the outcome against the Cowboys may come down to who wins the one-on-one matchup between wide receiver Ja’Marr Chase and defensive back Trevon Diggs.

Chase hauled in 10 catches for 129 yards, including a touchdown, against Pittsburgh. Diggs is coming off a league-leading 11 interceptions last season, the most picks in a season since 1981, when Everson Walls had 11 for Dallas.

“He makes a lot of plays, with however many interceptions he had last year. It felt like a million,” said Cincinnati quarterback Joe Burrow of Diggs. “He’s not afraid to take chances. He’s going to jump routes and you’ve got to be aware of who you’re throwing a 50-50 ball to when he’s covering them, because he’s going to make a play. I think he’s a former receiver at some point in his career. You’ve got to be aware of that.”

The Bengals may be without wideout Tee Higgins, who suffered a concussion against the Steelers. He didn’t practice on Thursday.

Thumbs down for Prescott

Dallas’ situation entering the second week of the season appears to be more dire than Cincinnati’s, though, as the Cowboys will be without starting quarterback Dak Prescott for a number of weeks due to a thumb injury suffered in their opening loss to Tampa Bay. They’re counting on backup quarterback Cooper Rush to manage the offense while Prescott recovers.

Rush started one game against Minnesota last year and led the Cowboys to a 20-16 victory, tossing a pair of touchdowns and one interception. He’ll need a similar type of steady effort to help the Cowboys upset — or at least cover the points against — the Bengals.

“Just do your job,” said Rush, reports Yahoo! Sports. “Just execute. It’s the same plays, it’s the same other guys, we’ve still got everyone else. I trust in those guys, they trust in me, just all come together as a group and make plays and execute.”