Cincy motivated to pummel Pittsburgh, while Cleveland gets to play Buffalo in Detroit 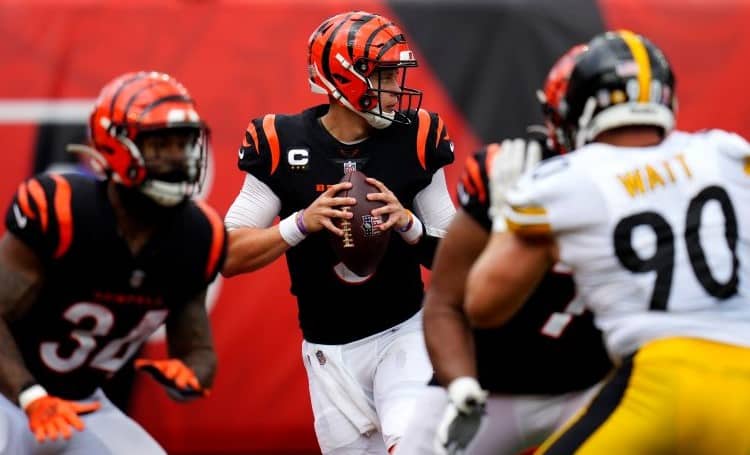 The Bengals return from a bye week favored to obtain vengeance against a Pittsburgh Steelers squad that spoiled the start to their season, while the Browns are playing somewhere they thought they wouldn’t.

Cleveland has the same fearsome opponent as expected in the Buffalo Bills, but it won’t have to play them in front of a boisterous home crowd. Due to predictions of a weekend snowfall of historic proportions in western New York, the NFL opted Thursday to relocate the 1 p.m. Sunday game to Detroit’s Ford Field, as the Lions are on the road this week. And it turned out the weather predictions were accurate.

Just a liiiiitle bit of snow in Buffalo this morning 😅

The snowstorm and venue change caused serious shakeups for the nation’s online sportsbooks this week. Initially, the points over/under for Browns-Bills dropped from the high 40s to as low as 42.5, based on how the conditions might limit scoring.

Then, most operators cited their standard policy in voiding all such bets based on the change in location. And on Friday the points total was again back up near 50 for new bets.

None of that may matter to many Ohioans, in that legal betting only begins in the state Jan. 1 with a universal launch of many operators both online and for in-person wagering. Nonetheless, many already have interest in following not just their teams but how the sportsbook operators view the rival teams in Cincinnati and Cleveland.

No Chase, but oddsmakers don’t mind

Presumably, the Bengals would like to forget all about that 23-20 opening loss at home to the Steelers that featured four Joe Burrow interceptions among other calamities. Or maybe they’re focused on remembering every detail, with all of the extra motivation it provides to win Sunday at Acrisure Stadium.

The oddsmakers lean toward the latter, knowing Cincinnati (5-4) has been the stronger team over the past two months. The Steelers (3-6) had beaten only one team since the Bengals before soundly defeating the New Orleans Saints 20-10 on Sunday.

Even though they’re playing without star wide receiver Ja’Marr Chase, the Bengals were favored by 4 points Friday (down from as much as 5 earlier in the week) against the Steelers at many of the major online sportsbooks. A Bengals backer only had to give 3.5 points, however, at FanDuel or BetMGM.

The over/under on the points total ranged from 40 to 41, with an “over” bettor best off using the 40 available from DraftKings.

Without Chase, who is sidelined for at least several games by a hip injury, the Bengals adjusted quite well two weeks ago (they had a bye last weekend) by turning the offense over to Joe Mixon. He showed his appreciation by running for 153 yards on 22 carries and scoring five touchdowns in the 42-21 win over the Carolina Panthers.

By coincidence, the Steelers got their own running game going for the first time all year on Sunday, compiling 217 yards on the ground versus the Saints. That took pressure off rookie quarterback Kenny Pickett, who has thrown eight interceptions with only two passing TDs on the season.

All running aside, Burrow’s quarterback play would seem to give Cincy a big edge Sunday, in that he has thrown just two interceptions since somehow having the four picks on Sept. 11 against the Steelers. Two of those came from star linebacker T.J. Watt, who just returned from injury last week for the first time since the opener, and safety Minkah Fitzpatrick, who missed the Saints game due to emergency appendectomy but has since returned to practice and could play Sunday.

Cleveland (3-6) may not have to play in tough conditions either fan-wise or weather-wise, but it faces a heavily favored Buffalo team (6-3) that may be very ornery after being upset two straight weeks. The latter loss came 33-30 to the Minnesota Vikings in an overtime game with a series of incredible twists at the end.

The Browns, meanwhile, looked dreadful in every possible way Sunday in losing in Miami to the Dolphins, 39-17.

Most of the oddsmakers had Cleveland as a 7.5-point underdog against Buffalo as of Friday morning, but there were a few sites — notably Caesars Sportsbook and PointsBet — where a Browns supporter could get 8 points.

After all of the ups and downs on the points total earlier in the week, all of the sportsbooks seemed settled Friday on an over/under of 49 for the indoor venue.

It’s possible, considering their customarily powerful ground attack, that the Browns wouldn’t have minded playing in a little snow. The Nick Chubb-Kareem Hunt train will need to get back on track, though, after Cleveland gained only 112 rushing yards against Miami while allowing 195.

The Browns gave up 491 yards overall to the Dolphins, which Bills quarterback Josh Allen might be salivating over. While he remains one of the NFL’s stars, he has been rather careless with the ball of late, with 10 interceptions on the season (considerably less-lauded Jacoby Brissett only has five).

Allen’s end zone fumble in the final minute of regulation and interception in overtime largely cost the Bills a game against the Vikings that they led by 17 points in the second half. It came a week after Buffalo lost to the New York Jets, and the oddsmakers just don’t deem it likely that such foibles will cost the title-contending Bills a third straight game.