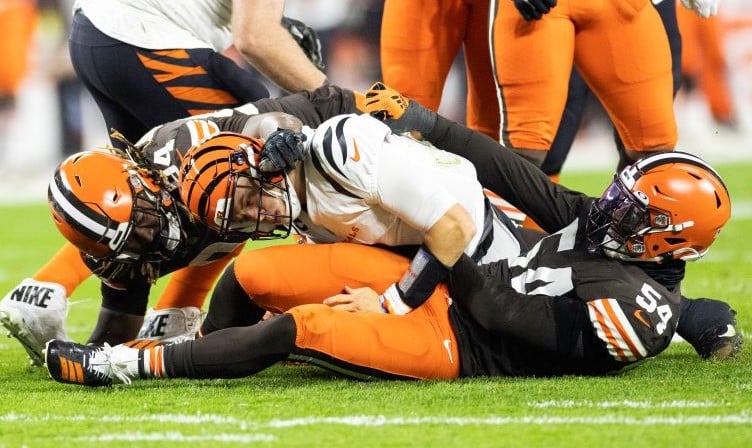 That was a rather horrifying costume the Cincinnati Bengals wore on Halloween night, with the question being whether they were trying to portray zombies from an apocalypse or the 2-14 Bengals of 2019.

Browns DOMINATE the Bengals on Halloween, 32-13 🎃

But the 32-13 loss to the Browns on Monday Night Football was just one game, and the NFL schedule-makers have been kind enough to give Cincinnati a relatively easy chance at redemption Sunday back in the land of the living — also known these days as Paycor Stadium.

The 4-4 Bengals host the 2-6 Carolina Panthers and are favored by oddsmakers to beat them by about a touchdown.

Ohioans can’t place a legal bet within the state until Jan. 1, when abundant retail and digital and mobile wagering options will be available, but they can back Cincinnati for a rebound if willing to cross state lines before 1 p.m. Sunday. Mobile sites such as FanDuel, PointsBet, Caesars Sportsbook, and BetRivers all listed the Bengals as a 7-point favorite Friday morning, with some other sites making the line 7.5.

DraftKings, with its -325 price, was among the best choices for a moneyline wager on a Cincinnati victory. The over/under on the points total seemed settled at 42.5 by universal agreement of the major sportsbooks.

The Panthers represent an intriguing opponent in having appeared to start playing with more of an edge ever since firing coach Matt Rhule and trading star running back Christian McCaffrey.

After beating Tampa Bay in lopsided fashion two Sundays ago, Carolina took the Atlanta Falcons into overtime in a 37-34 game the Panthers easily could have won. Kicker Eddy Pineiro missed both an extra-long extra-point attempt with 12 seconds left (after DJ Moore was penalized for helmet removal while celebrating his 62-yard TD reception that tied the score) and a short field goal attempt in overtime.

If Carolina had won that game, the Panthers would be in a somewhat ridiculous four-way tie of teams with 3-5 records in the NFC South. And if the Bengals hadn’t bungled things against Cleveland, they would be tied with the Baltimore Ravens atop the AFC North. Instead, a game behind with a more difficult schedule in the season’s second half, Cincinnati’s odds to win the division have slumped to +450 at DraftKings, with the Ravens -400. The 3-5 Browns, who have a bye this week, are +1200.

The Cincy offensive line will have to do a better job this weekend of protecting Joe Burrow, who was sacked five times and was under heavy pressure throughout against the Browns. He also lost a fumble and threw an interception in one of his worst performances, with the entire offense compiling just 229 total yards.

Give this man good oline play and he catches fire 🔥 pic.twitter.com/7TH0k1NkMr

Again, Burrow will be without favorite target Ja’Marr Chase, out with a hip injury for several more games. He will have to find a better way Sunday of connecting with Tee Higgins and Tyler Boyd, and the running game will have to step things up after Joe Mixon was held to 27 yards by the Browns.