Oddsmakers Tab Akron As 14-Point Underdog In Opener Against No. 4 Seed UCLA

If you happen to think the Zips can win it all, the odds go as high as 2000/1 at BetMGM — but they have to get by the Bruins first. 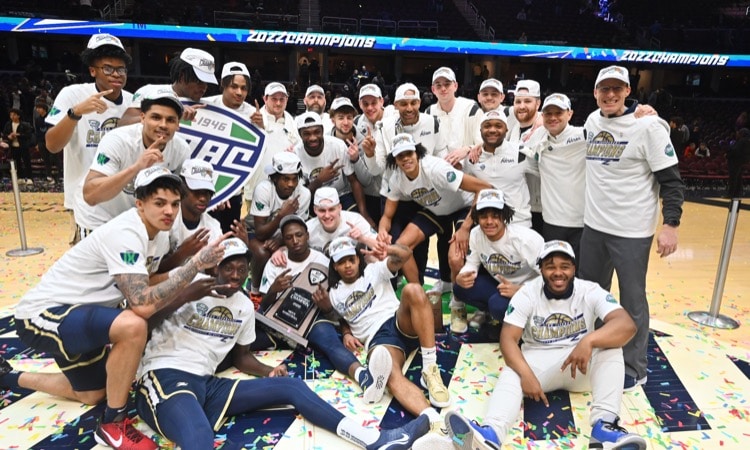 The University of Akron men’s basketball team knows as well as any team from the Mid-American Conference how to crash a party.

The Zips secured a place in the March Madness dance when they claimed the fourth Mid-American Conference Tournament title in team history with a 75-55 win over Kent State, earning an automatic bid to the NCAA Tournament. However, the No. 13 seed Zips, coached by John Groce, will have their work cut out for them when they take on No. 4 seed UCLA in an East Regional first round Thursday night at the Moda Center in Portland, Ore.

Surveying the mobile sportsbooks coming soon to Ohio, DraftKings and BetMGM have Akron as 13.5-point underdogs to UCLA while FanDuel has Akron as 14-point dogs. To win outright, the Zips are +740 at FanDuel, +750 at DraftKings, and +800 at BetMGM. The over/under for the game is 128.5 at all three sportsbooks.

The Akron #Zips will play UCLA on Thursday in Portland. Akron is a 13 seed. pic.twitter.com/LXwMGsFoVt

Enrique Freeman paced the Zips by scoring a team-leading 23 points in the MAC championship game on Saturday at Rocket Mortgage FieldHouse in Cleveland. The talented sophomore was named the tournament’s most valuable player.

Ali Ali leads a balanced Zips attack. He averages 14.2 points per game and is one of four players to average double figures. Xavier Castaneda has been good for 13.5 points, followed by Freeman at 13.2 and Bryan Trimble Jr. at 10.4.

Akron has averaged 71.2 points per game this season while shooting 46% from the field, and has allowed 62.8 points per game by opponents. But they’re facing a UCLA team that has won eight of it last 10 games and is superior to most of the teams the Zips faced this season.

Last year, UCLA played in the First Four and advanced all the way to the Final Four before losing in a memorable semifinal to Gonzaga.

In three years under head coach Mick Cronin, the Bruins are 21-11 in games decided by five points or fewer and are 37-4 when holding opponents to 70 points or under. UCLA averages 76.4 points per contest this season and is outscoring its opponents by just under a dozen points per game.

The Bruins, winners of 11 NCAA championships, represent one of the most storied programs in the history of the game. They’ve won at least 20 games 53 times in school history, including 45 in the past 56 seasons.